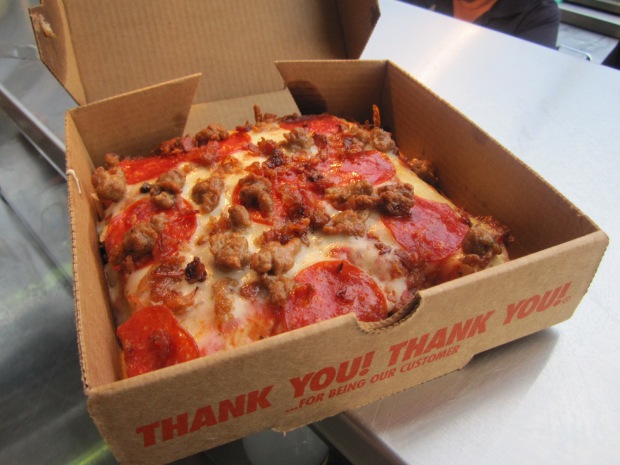 Two things should be made clear from the beginning. First, this post is about ballpark fare generally and not about The Nine best particular ballpark treats. Second, I am a man of simple tastes and should likely admit to being a picky eater. Therefore, certain items will miss this list that will seem implausible to some of you. For that, I merely offer to you that this list is obviously meant to be fun and not to be taken particularly seriously. Should you choose to take it seriously, I am prepared to follow up with a 1,200 word post about why I find nacho cheese to be gross.

Among those items that miss my list are: Peanuts, Cracker Jacks, Roasted Almonds, Brats, Burgers, Cotton Candy, and Nachos. Go ahead, sue me.

Many of the prototypical ballpark snacks are members of the salt family and popcorn is my pick of the litter. It doesn’t live up to the artery clogging euphoria that is movie theater popcorn, but if you’re in the mood to munch on something for a few innings, popcorn is the choice. Peanuts are messy and obnoxious for people sitting around you and lack butter, which is an important component of any guilty pleasure.

Downside: Getting a kernel stuck in your teeth for 6 innings and the drive home.

Perhaps you don’t think about ice cream when you think about stadium food, but it’s a nice cool treat to enjoy during a season that takes place mostly during the summer. The quality of the product varies a great deal across the 30 major league parks, so it’s important to only go for it if you’re not getting melty slop. When it’s good, not much refreshes like two scoops.

Downside: It requires a spoon or a cone, which is either too civilized for the park or too messy.

Chicken Fingers are the food of the Gods.

Downside: Requires two hands to eat or one hand and a balancing act on your lap. Potential for spills and drops.

Fries are a solid gameday food because they are easily to eat and often fit in a cup holder. Also, given that fries are generally considered a side rather than a main dish, it’s a lot easier to justify eating more of them. Plus, anything that brings ketchup to the discussion is a winner.

First of all, if you aren’t mixing red and blue in your snow cone to make an awesome purple hybrid, you are not living, my friend. Nothing refreshes like sugar water over ice and it’s super fun to eat. It just takes you back to being a kid and the sweetness gives you that much needed boost for extra innings.

Downside: Snow Cones are becoming rarer and have often been replaced by Lemon Chills.

Most ballparks have an option that is generally unique to its local. AT&T Park has garlic fries, Fenway has seafood. I imagine Target Field serves some sort of mind altering cocktail that keeps people cheering for the Twins. In general, you need to go for this option when you’re visiting. While I’m not a big advocate for trying new things, you can get most of these items anywhere and should consider the unique options when you travel.

Downside: Some of it is icky.

The soft pretzel a perfect snack. It’s easily to eat, results in no mess, and is surprisingly filling and satisfying. It’s somewhat customizable with various mustards, cheeses, and degrees of salt.

Downside: There really isn’t one other than that you can get a quality pretzel a lot of places, so you might not want to waste your appetite on one at the park. That’s crazy. Go get a pretzel, I’ll wait.

I’m confident in telling you that pizza is my favorite food. Pizza is awesome. The only thing keeping it out of the number 1 spot is tradition and the fact that it is a little less manageable than the item above it. But seriously, it’s hard to go wrong with a slice of pizza at any reasonably competent park.

Downside: Occasionally messy depending on style.

Of course. The hot dog is the ballparkiest of the ballpark foods. Easy to eat, fun to top, generally delicious even if it is subpar.

Downside: If you eat three or more, you will wake up that night with a stomach ache. It’s science. Two hot dogs, no problem. Three hot dogs? Near death experience.

What are you favorites at the park? What about favorite specific foods at specific parks? Let us know in the comments.