Appreciating Norm Cash and The Summer of ’61

My Dad and I have a running joke about the Fox Sports Detroit trivia question that goes something like this: If the question is about the last Tigers player to do (any statistic relating to hitters) in a single season, the answers is always, unquestionably, don’t even bother looking it up…Norm Cash 1961. It’s time to fully appreciate that season.

Cash spent 15 of his 17 MLB season in Detroit and accumulated 54.2 WAR (what’s WAR?) in a Tigers’ uniform and 54.6 WAR overall. He was a very good player in every way. He was a solid defender who hit .271/.374/.488 with a .382 wOBA (what’s wOBA?) and 139 wRC+ (what’s wRC+?) in his career. Overall, that offensive line is nearly 40% better than league average in his era. That’s a great, just missed the Hall of Fame career. In fact, there’s a reasonable case he should be in the Hall based on who is in and the insulting fact that he spent just one season on the ballot. I can accept that he isn’t a Hall of Fame, but he deserved more than 1.6% of the vote in his only year.

But let’s leave that aside. Cash had a very good career and is one of the top 10 Tigers position players of all time. What I’d like to highlight is what Cash did in 1961. Because it was ridiculous. Ridiculous. One more because it was that good, ridiculous.

Norm Cash and Mickey Mantle were substantially better players than Maris in 1961 but the HR/RBI totals were all the voters chose to care about. You can’t even say it was a carried his team thing because Mantle wore the same uniform and the Tigers also won over 100 games.

But let’s leave that aside and discuss Cash’s season. Take a look at how his numbers compare to MLB league average (for non-pitchers) in 1961:

Cash walked twice as much as the rest of the league and got on base in about 15% more of his trips to the plate while slugging and impressive 154 points above average. Put together, Cash hit 94% better than league average. 94% better than league average is something that has only happened only about 50 times in since 1901. Ty Cobb is the only other Tiger to ever do it (although there’s a guy in 2013 making a run…).

It was an impressive season compared to most others in MLB history and in Tigers history, but it also stands out above anything else Norm Cash ever did. I gave you his career line earlier, and while it’s great, it’s not anything like this. Take a look at his wOBA, wRC+, and WAR season by season. It’s nuts. 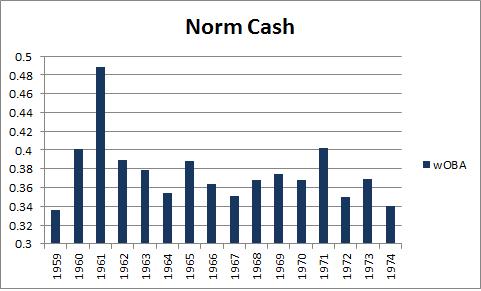 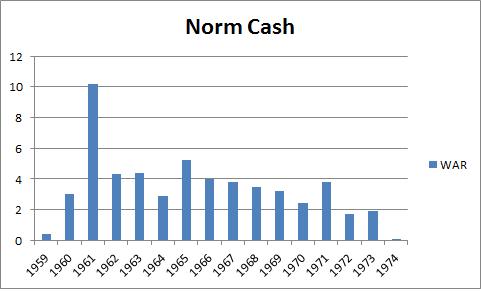 Most of the guys with all time elite seasons like Cash in ’61 usually do it again. By my count, 23 different players have posted a wRC+ of 193 or better in a single season since 1901. Only Norm Cash and Arky Vaughan never posted another season of 168 wRC+ of better. Almost every player who has ever had an offensive season like Cash did in 1961 has done it more than once. Cash had many very good seasons in his career, but 1961 is his unquestioned, absolute peak.

Cash was 26 years old in the summer of 1961 while Roger Maris made a run at Ruth’s HR record and while Mickey Mantle was running through his insane peak. Cash is often overlooked because he was more of a fringe All-Star type player than an MVP candidate most seasons, but his ’61 season is among the very best baseball has to offer.

Among Tigers, few have rivaled it. Five of the top six seasons in Tigers history by WAR belong to Ty Cobb. The other is Cash in ’61. Offensively, Ty Cobb is first and second among Tigers in terms of single seasons. Norm Cash is 4th. The guy in 3rd place hasn’t complete his season yet, so it isn’t in the official record.

Miguel Cabrera is hitting better in 2013 than Norm Cash did in 1961. That’s amazing, and Fox Sports Detroit might have to revamp the trivia questions to say, “other than Miguel Cabrera, who was the last Tiger to….”