Yesterday I wrote on the subject of NL Rookie of the Year and pointed out a good preseason candidate is a talented player with a clear path to playing time. Such a player is actually pretty hard to find in both leagues and I found it to be tougher in the American League.

Surprisingly tough. So tough, in fact, that I violated one of the conditions and went for talent alone along with what I believe to be a path to meaningful playing time even if it isn’t full playing time.

There are a ton of great prospects on AL teams, but this one should be the best in 2013. Heck, he should have been up a year ago. 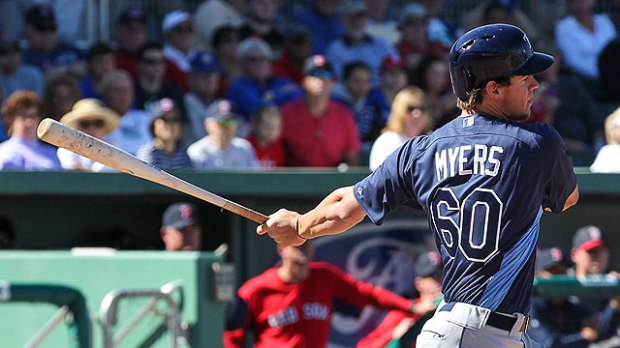 Myers was the centerpiece of the Royals’ trade for James Shields this offseason and I was among those to believe it was a foolish move for Kansas City. Myers has the ability to hit and hit for power while playing solid defense in a corner outfield spot. And he’s ready to do it now. He’s not a prospect who needs a lot of seasoning, he’s one who’s ready to contribute.

He should do so this season for the Rays whenever they decide to call him up. It will happen in one of three ways. A key player on the MLB club will get hurt and they’ll need him, he’ll sign a team friendly extension, or June 1st will roll around and his arbitration clock will get pushed back a season. At any rate, Myers figures to get four months or more in the show this year and they should be good enough to earn him some hardware.

He hit 37 homeruns last season to go with his .316/.389/.602 slash line between AA and AAA. He’s a little heavy on the strikeouts but balances it with a lot of walks too. The typical comparison for Myers is a right handed Jay Bruce.

And he’s just 22 years old. Myers is not just the best prospect on the Rays, he’s one of the five or six best in the entire sport. Jurickson Profar is another AL prospect who comes to mind for the 2013 season, but his path to playing time is blocked by All-Stars while Myers is blocked by Matt Joyce, Kelly Johnson, or Luke Scott. Mostly, he’s blocked by service time.

The power hitting outfielder should get a few swings in the minor leagues this Spring before getting the call to St. Pete, but once he’s there he will be there to stay. Myers looks to pair nicely with Evan Longoria in the middle of the Rays order for years to come.

Barring injury, either to Myers or to one of the players keeping Profar out of the lineup in Texas, the smart money is on Myers to claim the Rookie of the Year honors.