A Changeup in the Tigers Pitching Approach

Fastball velocity catches your attention. Knee-buckling breaking balls demand respect. But the changeup is not usually a pitch that grabs headlines, but here I am, writing about it. I’ve mentioned it briefly in these electronic pages and Rod Allen has touched on it as well: the Tigers are throwing more changeups and it’s working.

Now I’m not sure if this change is coming from Jeff Jones, the Tigers pitching coach, or Jim Leyland. Maybe it’s coming from Alex Avila. Perhaps the starters are doing it themselves and learning from one another. Heck, the front office could be putting useful information about the pitch in front of the players. I don’t know the answer, but I know it’s happening and I know it’s yielding some good results.

First, let’s check out the Tigers starting pitching as a whole over the last five seasons:

The trend is pretty clear, even if we can’t identify the cause. The Tigers are trading fastballs and sliders for curveballs and changeups. Now the slider versus curveball transformation could be many things, but those are both breaking balls and they are moving together. The changeup is a distinct pitch. Let’s look at the same chart but with sliders and curveballs combined: 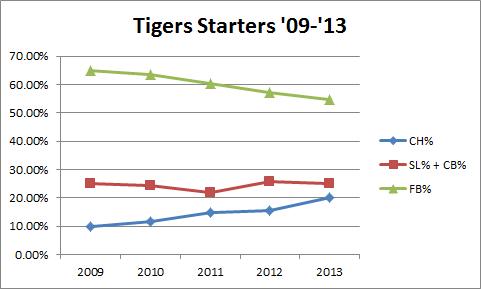 This allows you to see the trend a little better. Fastballs down, changeups up. Breaking balls mostly constant (splitters, cutters, knucklers all excluded due to very low numbers).

So is this an overall trend that reflects a difference in organizational approach, or is one pitcher getting changeup happy and obscuring the results. (The size of the scale on the vertical axis makes these changes look minor, but we are talking about noticeable changes).

Verlander, as you can see below, matches the overall trend perfectly. He’s changed the breaking ball he throws, but he hasn’t really changed the percentage of breaking balls. He has, however, traded fastballs for changeups: 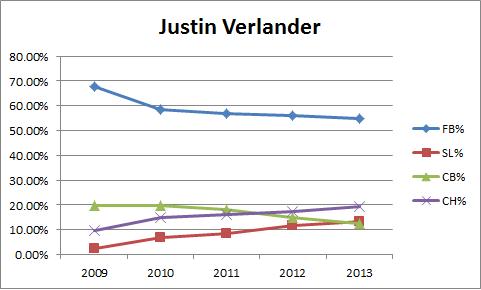 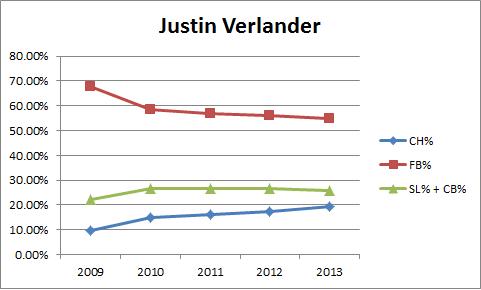 The pattern fits Scherzer (joined the Tigers in 2010) a bit less cleanly, as he is using more breaking balls and changeups instead of the fastball. You can see here:

I’ve made a ton of Rick Porcello’s breakout campaign this season, and looking at his pitch type, he fits the mold perfectly:

Fister, too, fits the mold especially if you look at his change from 2011 (when he joined the Tigers):

Sanchez also fits the mold, especially since joining the Tigers last year, but he is trading breaking balls for changeups more so than fastballs in recent years:

Twelve graphs later, what have we learned? Well we can see that the Tigers starters are collectively and individually moving toward changeups at the expense of the fastball, while also shifting which types of breaking balls they throw. I’m not sure if this change in approach is coming from the pitching coach, the catcher, or the pitchers themselves, but the trend exists and it’s hard to argue with the staff that has 4 of the top 12 pitchers by WAR so far in 2013 and leads the league by more than 3 full wins as an entire pitching staff.

You can see how the results are getting better, even if not all five guys were on the staff each year. Compare this to the top charts. I’m not making the case that the changeups are making the Tigers staff this much better, but rather that the change in pitch type as an organization is a noticeable trend that is tracking with success: 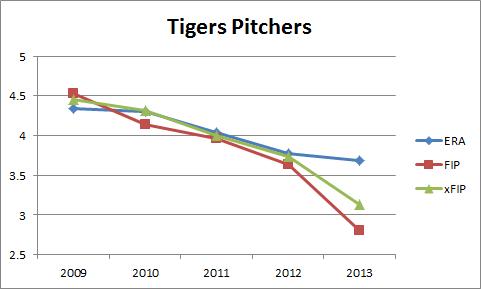 And the last question you should be asking, also has an answer. This is not a league-wide trend:

The Tigers are throwing more changeups. I’m not sure whose idea it was, but it’s working and it isn’t happening in all 30 major league cities. Changeups aren’t usually thought about as a “stuff” pitch, but it might be time to rethink that approach. I know there are some advocates for the pitch, like Dave Cameron at Fangraphs, who like me, thinks great changeups are vastly underappreciated, but on the whole, we overlook the changeup. Maybe we shouldn’t.