The Time Has Probably Come for Avila 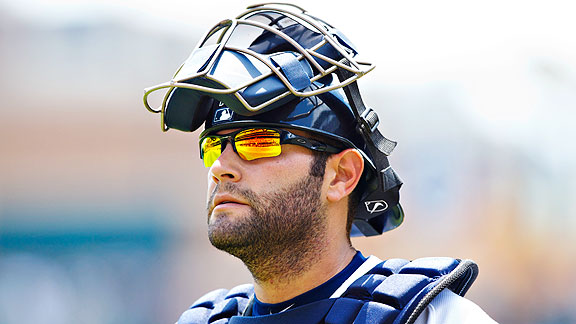 I’m going to be honest up front. I love Alex Avila. He’s one of my favorite players. I caught all the way up through high school and always thought the best catchers were one part strategist, one part shrink, and one part over-protective mother. I think he’s the perfect mix. I love his demeanor and his class. He’s a strong defender and a good teammate. He calls a very good game. And in 2011, he was an elite hitter. In 2012, he was a solid MLB regular. But this year he looks lost. I don’t have the answers, I just have questions.

I’m always an advocate to give struggling hitters time. There’s random variation in outcomes and performance. I wrote about that with Victor Martinez recently. Sometimes players need time to figure things out. But we’re approaching the halfway point of the 2013 season and Alex Avila hasn’t figured it out. Granted, it’s not getting worse, but it’s not getting better.

Going deeper, he’s walking at a good rate, but the strikeouts are up and the BABIP is down. Unlike with Martinez, Avila isn’t making a ton of hard hit outs. He’s had some, but not so many that you could chalk this thing up to luck. He’s hitting fewer line drives and more groundballs. He’s swinging less at pitches outside the zone and more at pitches in the zone, and just a little bit more (1%) overall. But the contact rate is down both in and outside the zone.

But then I went looking at his performance by count, and things got confusing: 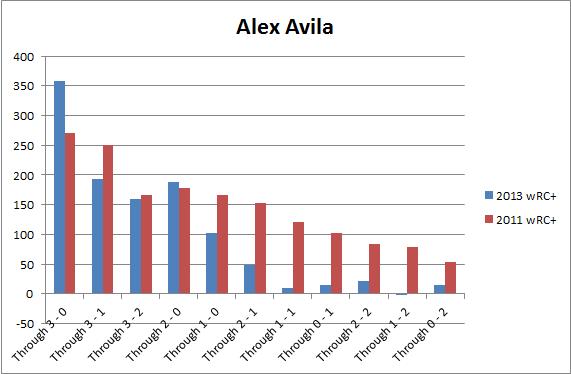 I’m looking at that graph comparing his 2013 and 2011 wRC+ by count and it looks pretty comparable for the hitter’s counts and pretty uneven when he’s behind in the count. And that kind of throws a wrench in this whole thing. I thought I was looking at Avila and seeing some sort of problem with his swing. Maybe something hurts, maybe he’s out of whack. But when he gets ahead in the count, he can hit. If his swing was messed up, he couldn’t hit in 2-0 counts.

So this has to be between his ears. It seemingly has to be. He says he’s healthy and I believe him. So it’s something happening with his approach, which is weird because his walk rate is good. Above average, even. What we’re looking at is kind of baffling. Clearly Avila isn’t performing at the plate, but the best explanation I can come up with is that it’s about his approach, not his health or mechanics. But he’s walking and chasing fewer pitches, so how can his approach be messed up?

Like I said guys, I don’t have answers, just questions. The contact isn’t good and the power is gone. He’s shown flashes of it, but it’s mostly not there. So I think it’s probably time to send him down to Toledo to figure this out. I generally have three conditions for sending an established player down to the minors:

I think we’re at the point where all three conditions have been met. We’re closing in on the halfway point and Avila isn’t turning the corner. It’s clearly not helping him to get at bats in Detroit right now and the Tigers can offer Pena and a minor league compliment who can produce at a better level than Avila can.

It’s time. I would consider myself among the most patient people for these kinds of things, but I think it’s time to send Avila to Toledo to work on whatever it is that has gone wrong. He’s shown us he has the ability to be a star player, but he just can’t get anything going at the plate right now and there is no indication it’s just bad luck. The Tigers need to get Avila going and I think he needs to head to AAA to get going.

I’m a huge fan of Avila and I’m pulling for him to snap out of it on every pitch. But I think the time has come for the Tigers to make the move and outsource his recovery to Phil Nevin and Bull Durham down I-75 in Toledo. I don’t want to see it happen and I won’t stop wearing my Alex Avila #13 shirt, but it’s not helping anyone to keep him in Detroit and in the lineup.

The Tigers are easily one of the top teams in the league right now despite Avila’s struggles. Imagine what they could be if he was hitting the ball like we know he can. Two or three weeks in AAA should help, and if it doesn’t, then at least we know where we stand. The team knows the player better than I do, but I think it’s time and I’m not an easy person to push to this conclusion.

It’s time for the Tigers to send Alex Avila down so that they can recall the good Alex Avila as soon as possible.