Miguel Cabrera and Chris Davis Own 2013

Miguel Cabrera came into 2013 having recently won an MVP and the first Triple Crown in decades. No one would bat an eye if you mentioned his name among the greatest hitters in baseball history whether the listener was a believer in batting average and RBI or wOBA and WAR. His off field issues might cause some whispers, but his name is essentially synonymous with great hitting.

Chris Davis had a well-established reputation of being a slugging hacker. Lots of power, not much of an approach at the plate. The Orioles got a solid season out of him in 2012, but it was a 2.0 WAR kind of season, not a Miguel Cabrera kind of season. He was 27 years old in need of a strong season to avoid being labeled a platoon player.

But that was two and a half months ago. Cabrera’s story isn’t much different. He’s having his best season, but that doesn’t surprise you very much. He’s always been a star. But Davis’ story is much different. Chris Davis was closer to Crash Davis that he was to Miguel Cabrera a year ago, but now he and Cabrera are sharing the leaderboards and a lot of sentences about the game’s best hitters right now.

This isn’t a post about who Cabrera and Davis were before or who they are going to be after. This is Miguel Cabrera and Chris Davis in the summer of 2013.

(All statistics reflect the season to date as of 6/17, before the start of the Tigers-Orioles series at Comerica Park)

Cabrera is hitting for a higher average and is getting on base more frequently, but Davis is making up for it with a higher slugging percentage. Balance those differences out and their wOBA are nearly identical. 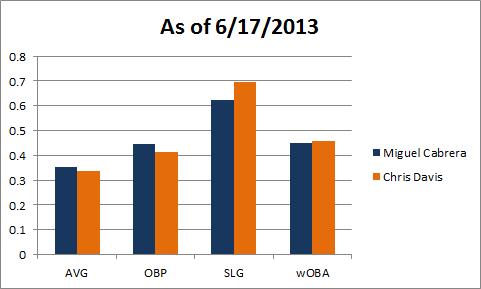 Once we control for park and league average, Chris Davis tops Cabrera in wRC+ narrowly 194 to 189. In terms of overall offensive value, they have essentially been the same player thus far. Remember, this post isn’t about what to expect in the future, it’s about what they’ve done to this point.

Breaking down the SLG, you can see the hit distribution gives Davis more extra base hits, but Cabrera has more hits period.

Having read this far, I probably don’t have to tell you that Miguel Cabrera’s approach at the plate has been better:

And Davis hits more fly balls in place of the ground balls hit by Cabrera: 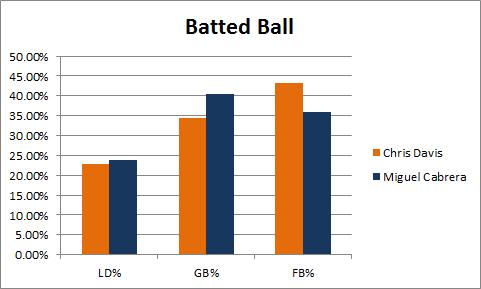 It’s a draw, with a slight edge to Davis. Cabrera has the track record and will certainly have the better career, but right now at this moment, they are essentially the same.

That’s amazing and wonderful and weird. Think of it like this. A year ago, Miguel Cabrera was crafting the first half of an MVP season. Chris Davis was the position player the Orioles called on to pitch in a marathon game with the Red Sox on May 6th.

I didn’t have to look up the date, I remember it pretty well. I read about in a hotel room on my wedding night. A year ago, Chris Davis was so expendable to the Orioles that they let him pitch. Now he is, for all intents and purposes, Miguel Cabrera.

That’s pretty freaking cool. Baseball is often predictable, but there are plenty of exceptions to prove the rule. Davis is having quite the exceptional year. I’ll be glad once he leaves town and does his Cabrera impression against other clubs.