Nick Castellanos is Forcing the Issue 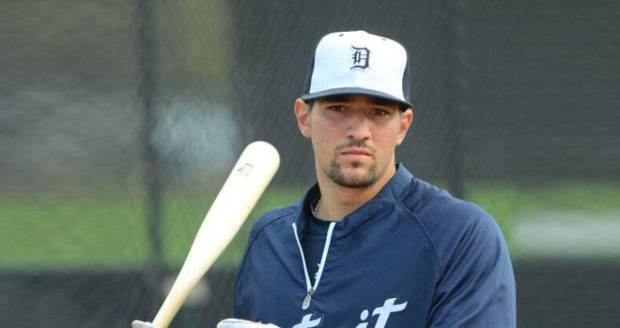 I’m the last person in the world you’ll hear clamoring for the Tigers to make roster moves to replace players who are having  a bad two weeks and I’m never someone who advocates rushing prospects because you have a need at the major league level. This is not that kind of post.

In fact, it’s the opposite. Andy Dirks is slumping at the plate, although his defense has been very good, but Matt Tuiasosopo is more than capable of stepping in to be the Tigers everyday left fielder for now. The Tigers had the league’s best offense entering the day (112 wRC+) and we all know they have the best pitching staff in baseball quite comfortably. I’m not worried about the Tigers one bit. They are a great team who will win the Central, barring significant injuries, quite easily.

But Nick Castellanos, the Tigers top prospect, is sitting in AAA Toledo and he’s starting to make some noise. A lot of it actually. No player under 24 had a higher wRC+ than Castellanos in AAA except for the recently promoted super-prospect Wil Myers. Nick is now the best young hitter at his level and he may be outgrowing it.

The book on Castellanos is a great hit tool with the expectation that the power will develop. His approach has needed work and his defense is still coming along. The club moved him to the OF after the Fielder signing, but he was originally a 3B. He’s 21 years old, in Triple A, and he’s forcing the issue.

Since I no longer live in Toledo, I haven’t seen Castellanos play defense, but I haven’t heard any horror stories, even if he isn’t great. But I can follow the numbers he’s putting up at the plate from 600 miles away and it’s starting to get good.

Here is how Castellanos’ numbers have looked over the course of the season (OBP, SLG, K%, and BB% at the end of each game): 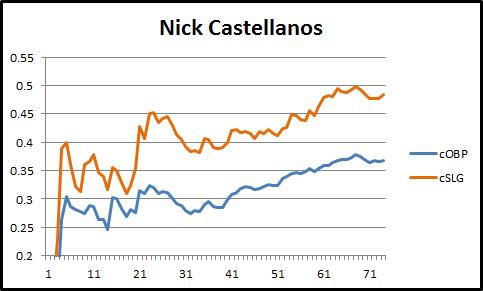 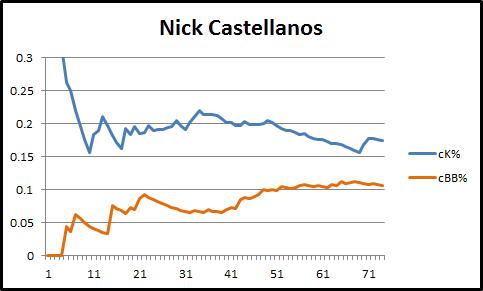 His OBP is now over .350 and his SLG is up near .500 and both numbers have been trending upward. He’s mashing lefties (1.016 OPS) and isn’t having trouble with righties either (.805 OPS). The walks are way up from last year and the strikeouts have come down. And these numbers are coming from one of the lowest BABIP’s of his career (.332 entering Wednesday) against the best competition he’s ever faced.

In half a season at Triple A, he’s put up big numbers and the biggest of those are coming more recently. The plate discipline appears to be getting better and the power is coming. I’m sure he could benefit from more seasoning and his defense probably still needs work, but it’s getting close to that time.

The Tigers don’t need him, but he’s getting close to the point where it might be time for him to come up anyway. You shouldn’t rush a prospect because your team needs him, but you also shouldn’t stash him in the minors just because you don’t. The Tigers shouldn’t be worried about his service time when they’re in their championship window. There are times to worry about an arbitration clock and there are times to play your best 25. This is the latter.

I’m not a professional scout and won’t pretend to be and I haven’t seen Castellanos live this year, but if I’m following the numbers it’s starting to look like he’s ready. This is the Tigers’ blue chip, top prospect. The Tigers are built to win now with or without him, but if he’s ready, then it’s time to call him up.

The timetable has always been late 2013 for Nick and he’s walking around Fifth Third Field in Toledo like he won’t be there much longer. I’m not saying it should be tomorrow or even this month, but I think it’s time for Nick to come north.

Two years ago, people wanted to call him up to play 2B because the Tigers didn’t have a 2B. That was silly because he wasn’t ready and he wasn’t a 2B. But it’s two years later I’m starting to think he’s ready to hit big league pitching and I’m starting to wonder if he’s one of the best OF bats the Tigers have to offer.

I think we’ll see Tuiasosopo get a few more at bats in the next couple weeks and if he hits, maybe the Tigers let Nick work on his glove. But if Tuiasosopo isn’t mashing the ball and Castellanos stays hot, our deadline deal might be with the Toledo Mud Hens, when we recall a potential franchise cornerstone.