How To Pitch To Miguel Cabrera

A simple Google search of the above headline leads you to about 7 million pages, none of which appear terribly helpful. Some pose the question if one should pitch to Cabrera and some discuss recent attempts to pitch near Miguel Cabrera’s head. Others still just show you .gifs of Cabrera hitting homeruns, which seems pretty similar to just telling you that it’s tough to get this guy out.

In fact, he is the hardest hitter in baseball to get out, posting a league best .454 OBP. He makes the fewest outs in baseball and also does a considerable amount of damage, posting a .670 SLG, .470 wOBA, .306 ISO, and 202 wRC+, depending on which statistics you like to use to measure how much a player crushes a baseball. Heck, I’ll even cite the 26 HR and 85 RBI just because. Here’s the point, he’s hard to get out and when you don’t get him out, he makes you pay.

Which returns us to the original inquiry, how should you pitch to him?

Let’s start with some quick assumptions:

From here, we’re going to breakdown the approach using Cabrera’s plate appearance data against RHP from 2013 because he’s presumably adapted throughout his career, so we shouldn’t try to get the 2009 version of him out. Let’s go for it.

First, let’s take a look at where in the strikezone Cabrera will swing and miss:

So overall, you can get Cabrera to swing and miss if you go low and away or if you elevated the pitch out over the plate. This stands to reason as his batting average zone plot looks like this: 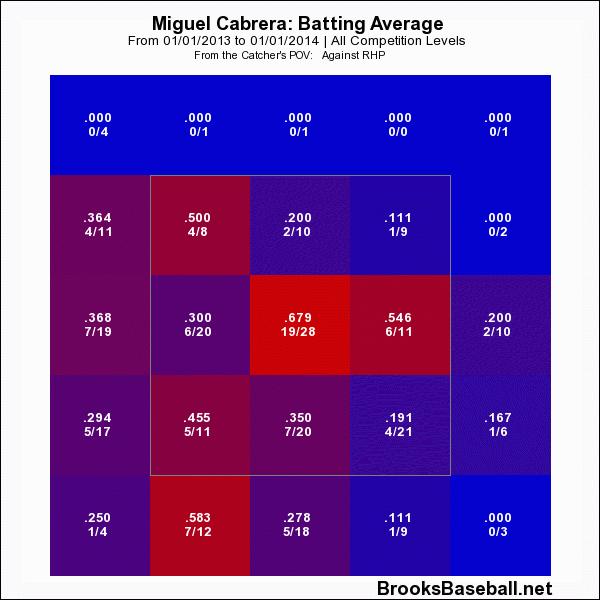 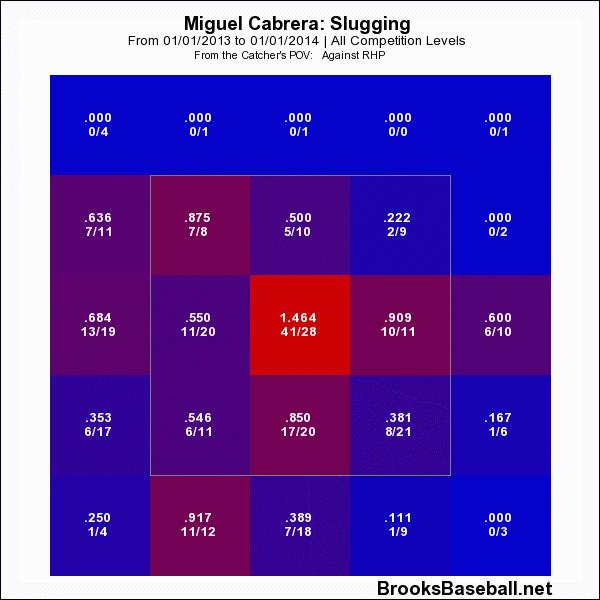 So we have a general idea about where to pitch Cabrera based on his 2013 performance. For reference, the same pattern holds true for the last few seasons. He’ll chase down and away and above the zone, and those are the two places he’ll get the fewest hits and the fewest extra base hits.

Let’s now break it down a little by pitch type. If you throw him hard stuff (various fastballs), you want to keep it away from him. This is his slugging percentage against hard stuff:

And again, whiffs per swing against fastball type pitches:

So we have a little more information now. We know that if we’re a right handed pitcher, when we go with the fastball we want to go up and away, and avoid the inside part of the plate at all costs. Let’s turn to breaking balls and offspeed pitches. Here’s the whiff per swing rate on soft stuff: 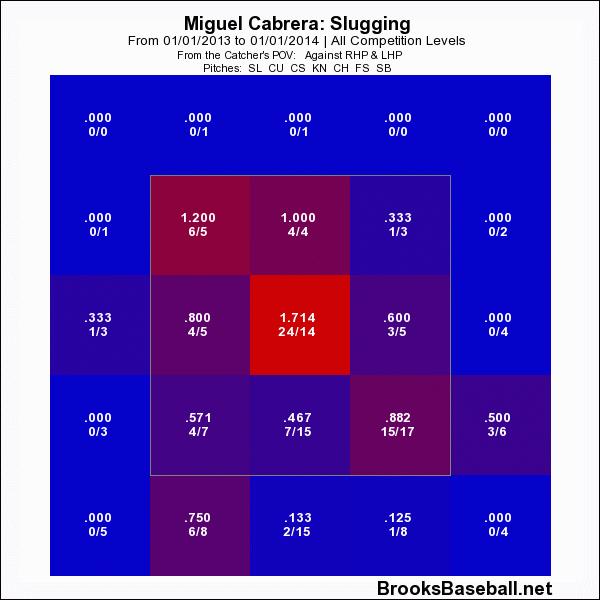 You can see here that Cabrera isn’t likely to swing at offspeed pitches inside and outside, but he will swing if they are over the plate and will crush them if they are in the zone.

So what have we learned? First, throw the fastball up and away and the changeup and breaking ball low and over the plate. Those are pretty much the only places to get Cabrera to chase and get himself out. We could break this all down by count, but that would get extremely long and messy. There are 12 possible counts to breakdown and that’s a lot of charts, so let’s just stop here with the zone breakdowns.

If we look by pitch type more generally, you can see there are pitches that work better.

He’s more vulnerable to sliders and splitters, and you can get him out with the cuvreball, but there is a big risk involved if you miss with that pitch because he may crush it.

Cabrera is baseball’s hardest out and he’s also one of the game’s most feared power hitters. There isn’t an easy way to get him out, but the way to do it is to work the fastball up and away and the breaking ball down and over the plate. That is, however, no guarantee. Because sometimes he does this (click to play if it isn’t running on your screen):