The Cy Young Case For and Against Max Scherzer 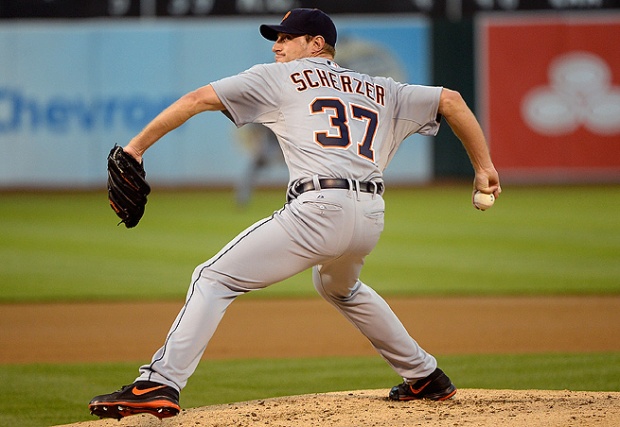 Let’s get the basics out of the way early. We love Max Scherzer. He’s one of our favorites. We like his stuff and his work ethic and his intelligence. He’s one of us and his eyes are different colors. We’re rooting for him to help the Tigers win and for him to be individually successful. He’s awesome. In fact, we’ve written of his awesomeness quite often:

But here are New English D, we don’t put a lot of stock in wins and losses for pitchers. In fact, we put exactly zero stock in them, so the fact that Max is 18-1 means nothing to us in terms of postseason awards. I’m glad the Tigers win a lot in Max’s starts and it’s nice that he gets credit, but it’s a useless statistic when it comes to actually evaluating individual performance. Which means we need to consider more accurate stats when considering who the Cy Young should be in the AL. Let’s start with the candidates. To do so, I’m going to use Wins Above Replacement (what’s WAR?) as a starting point. I’m going to look at WAR only to determine who should be in the conversation.

Eight AL pitchers currently have 3.5 WAR or higher while the leader has 5.3. WAR isn’t precise, but I don’t believe there is a case to be made that it’s more than win off the mark. Like I always do on the site, those numbers come from FanGraphs WAR because I think it is a better reflection of performance than something like Baseball-Reference’s WAR (rWAR) or a basic runs allowed WAR (RA9-WAR). Remember, I’m only using WAR to draw the boundaries, not to make a decision.

It’s worth noting that each starter has a different number of starts and innings based on their current spot in the rotation and how many games their team has played, in addition to any injuries. I will not penalize a pitcher because of his team’s schedule, but they will lose credit for injury time. Let’s see starts, innings, innings per start, and WAR per 200 innings:

Sanchez is clearly the best pitcher inning for inning by WAR and Sale is easily going the deepest into games. Scherzer and Felix are currently tied in WAR despite Scherzer being a start behind based on his team’s schedule and Scherzer leads in WAR/200 IP while having nearly identical IP/GS. WAR gives us these 8 candidates, and the early returns look good for Scherzer. Let’s go deeper.

Here are their ERA, FIP, and xFIP (what’s FIP and xFIP?):

Kuroda, Felix, and Sanchez are all basically allowing the same number of earned runs per nine innings. Sanchez, Felix, and Max are clear the leaders in FIP. Darvish and Felix are your leaders in xFIP. But as you all know, park adjustments are really important. So let’s check out ERA/FIP/xFIP- stats that adjust for ballpark. Remember that 100 is average and everything below that is a percent better than average (ex. 85 ERA- is 15% better than average):

With park adjustments, we have a whole lot of guys between 59 and 70 for ERA-. Remember, this doesn’t even factor in defense. Only Verlander is outside of this window. By FIP-, we have Darvish and Kuroda falling back. By xFIP-, Darvish, Felix, Anibal, and Sale are your leaders.

Let’s now take a look at K and BB%, just for some added context:

And I won’t take the time to break these stats down, but if you care about Win Probability Added and Run Expectancy 24, here you go:

So let’s make first cuts. It’s obvious we can get rid of Verlander. I’m also getting rid of Holland because he isn’t a leader in anything. That leaves us with six choices. All of which could win the award based on the final month and a half, but who is in the lead right now? That depends on what you value in a pitcher. Since this is a Tigers site, we’re going to look at this through the prism of #37.

The Case for Scherzer

Scherzer is tied for the league lead in fWAR which is based on FIP. Adjusting for park and league average, based on Scherzer’s Ks, BBs, HRs, and innings, he’s tied with Felix for the best WAR in the AL. If we assume that they would both pitch at this level over the course of an entire season, Scherzer is on a better pace, as seen through WAR/200 IP. Only Sale goes deeper into games than Scherzer. Max and Felix are essentially tied in FIP- and Scherzer throws more innings per start just barely. Only Sanchez is above them in FIP- and he missed starts due to injury, so he takes that hit. Looking at which pitchers induce the fewest hard hit balls, Scherzer and Sale are the two leaders among AL starters on this list at about 13%.

If you care about what a pitcher can actually control, the award belongs to Scherzer. He has a higher K% and is only a touch behind in BB%. His WPA and RE24 are higher as well. Batters hit fewer balls hard against him. Right now, the worst you could say about Scherzer is that he and Felix are basically even when it comes to the FIP side of things. In my mind, it’s razor thin, but I’m voting for Scherzer if I’m voting based on what a pitcher can control.

The Case Against Scherzer

Five pitchers on this list have lower ERAs. Including Felix, and including the leader, Kuroda. We should at least adjust for park using ERA-, but the message is the same. Scherzer allows more earned runs. Let’s take that a step further, because if we’re talking about earned runs, let’s just talk about all runs. If you’re arguing that a pitcher is responsible for his earned runs, then they are responsible for their unearned runs as well. The argument for FIP is the argument that defense and batted balls are fluky. If you don’t buy that, you have to accept errors too. Let’s see Runs Allowed Per 9 and then let’s convert it to a WAR number based on innings and park.

So if you care about runs allowed, other numbers be damned, the case for Kuroda gets pretty strong. Darvish shows up too. Max and Felix are still in the conversation, but a step down. If you just care about the outcomes and not the process, Kuroda has a solid case.

I’m not saying this because I’m a Tigers fan, but at this moment, Scherzer has my vote over Felix by an eyelash. You can’t go wrong with either. Everything you’ve seen at this site supports a FIP style approach that factors out defense and luck. We only care about what a pitcher controls and those two guys are the class of the AL based on that. Sanchez falls out because he missed time with an injury, otherwise he’d likely be the guy. The case against Max is also a case against Felix. If you are going to talk about his ERA or RAA, you have to then credit Kuroda. The argument for Max is that he’s limited walks and homeruns while striking out a lot of guys across a lot of innings and going deep in games. He’s allowing more runs, but runs are a team stat. The pitcher takes some responsibility, but not all of it. Some is luck, some is defense.

Today, I would vote for Scherzer, but with 7-8 starts left, lots of these guys have a shot. Max is going to win because he’s 18-1, but I couldn’t care less. His record doesn’t tell you anything of value. He’s the Cy Young for me in spite of his record, not because of it.