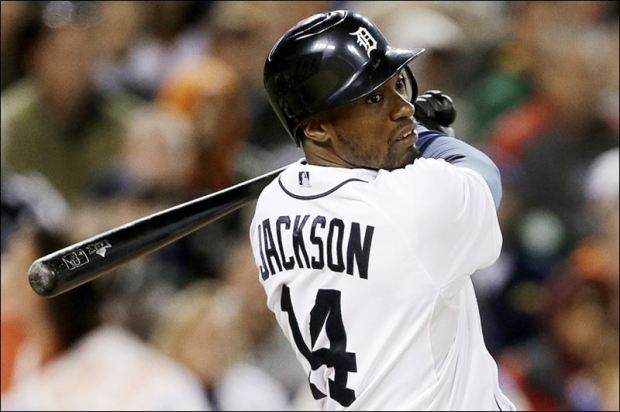 Austin Jackson is a pretty great baseball player. He’s not Miguel Cabrera or Mike Trout great, but he does a lot of things well. He’s averaged 3.4 WAR (what’s WAR?) per 600 plate appearances and has been as high as 5.2 in a season and never lower than 2.4. He plays excellent center field, runs the bases well and is something better than league average at the plate before you consider his position.

But unless you’re Austin Jackson’s mother or his dog, you don’t think he’s perfect. He used to strikeout a lot and he improved in that department and now just strikes out a bit more than average. If you look across the stat line, he’s a pretty good all-around player. If you look inside the numbers, there’s a very strange split developing this season. Let’s take a look:

Let’s forget that 2010 happened, not because it didn’t, but because four years is a long time and it’s pretty likely that Jackson has grown as a player and isn’t the same hitter he was back then. Let’s just look at 2012 and 2013 in order to look for differences. What moved Jackson to struggle so much against southpaws this year?

So first, the plate appearance distribution isn’t funky and he’s walking less against righties this year. Strikeouts are remarkably consistent. When you drop down to the second figure you can see how similar his production was across the board in 2012 and how different it is in 2013. If you notice the purple column, you’ll recognize that this issue is BABIP driven. So now the question is if this is luck or a problem?

You’ll notice a fairly even split in batted ball data in 2012 and in 2013 we see a drop off in line drives against lefties in favor of fly balls. So, Austin Jackson is hitting the ball in the air more often in against lefties in 2013 – and hitting fly balls instead of line drives will drop your BABIP. And a lower BABIP will hurt your production. Therefore, this is a real thing. What’s behind it?

If we hop over to Brooks Baseball, we can derive an interesting lesson. I won’t present all of the numbers because there are too many, but I’ll pull out the relevant data. First, he’s hitting fastballs and sinkers in the air more often this year against lefties and he’s putting a lot fewer sliders in play. And when he puts those sliders in play, they are all on the ground. He also hasn’t hit a single homerun on a fourseam, sinker, or slider against lefties this year.

To me, it says his timing is off and he’s out in front. If you’re out in front on a fastball, you’ll hit it in the air. If you’re out in front on a slider breaking toward you’re more likely to hit it into the ground. If you run a query for LHP throwing sliders to Austin Jackson that he hit on the ground – most are down and in. I’m not a master of GIFs, so I can’t show you clips or anything, but it will be something I’m looking for as the season winds down.

Jackson famously lost his big leg kick last year so it’s not outrageous to think some little mechanical issue could be messing with his ability to turn fastballs around rather than hit them in the air and the same mechanical issue could be getting him to roll over some sliders and swing through others. Hitting is about timing and pitching is about interrupting timing.

Jackson doesn’t seem to be having much of an issue with righties and it should be easier to pick up pitchers from lefites, so it seems logical that there’s something about lefties this year that he’s miss-timing. When you’re dealing with fewer than 200 PA against southpaws, you only need a few fly balls to turn into line drive hits for this to even out. Jackson needs to be better against lefties, but there’s also no reason to think he can’t be better against them.

He hit them last year with no problem and if he had a serious problem with his health or swing it would show up against righties. I’m not worried about him long term. This looks like a short term issue that he will have the ability to correct with a little bit of work. He’s having a good season overall and has hit well over the last 30 days (.311/.393/.443) so this isn’t some terribly detrimental problem that’s ruining the Tigers. It just catches your eye because it’s surprising that a player this good would have such a funky platoon split, but he does. Now why have some understanding of why that might be the case.