A Race Between Alex Avila And Victor Martinez

I’ve lured you here under false pretenses. Sorry about that, but I won’t take up much of your time. This isn’t a post about an actual race, it’s about a metaphorical race and I’ll keep it short. Over the last few months, Alex Avila and Victor Martinez have started raking. Fifty-seven games in, both had OPS’ under .600. That’s not very good if you’re new to OPS. Since then, they’ve been better. Much better. They’re racing to the finish line, one might say. Normally we’d use wOBA or wRC+, but OPS is way easier to gather for an analysis like that, hopefully you’ll accept it as a stand in. Take a look. 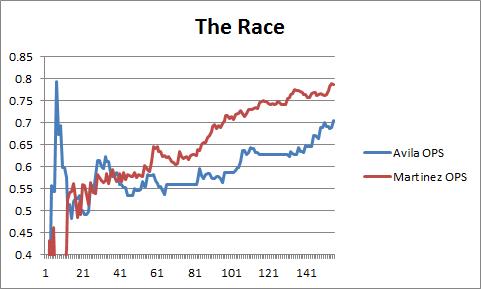 Since game 57, they’ve both been on a march toward awesomeness. The two flat lines in blue are Avila’s DL stints. Let’s get a quick look at their numbers before and after and then I’ll let you go.