The Tigers already won the trade, but let’s talk about Ian Kinsler some more anyway. Through 78 games he has a 128 wRC+ and 3.6 WAR. If he was that valuable over an entire season we’d have loved the acquisition and it’s only now July. Nicely done, everyone involved. Kinsler is simultaneously playing good defense, running the bases well, and having his best offensive season since 2008. His BABIP and ISO are up so far, but not unsustainably so. Kinsler is a good player having a good season. I didn’t think he had a 6 win season left in him, but I certainly thought a 3-4 win season was doable.

One thing I noticed over the weekend was this. 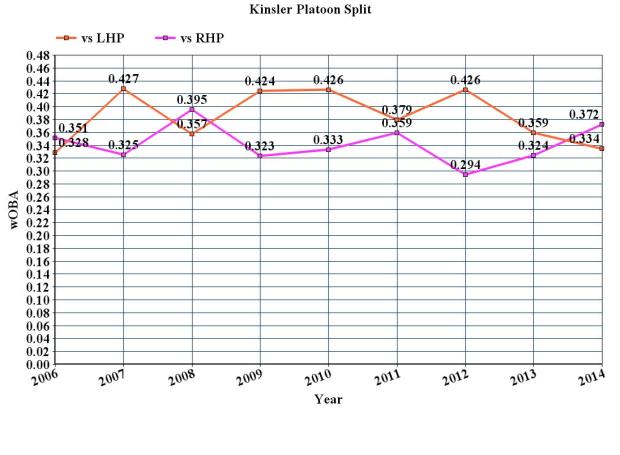 The first thing I would say is that a reverse platoon split (when you hit same side pitching better than opposite side pitching) is extremely rare and takes multiple seasons to stabilize. I don’t think Kinsler is all of a sudden a true talent righty masher, but I will point out that his best season prior to this was 2008 (offensively) and that was the only other season in which he was meaningfully better against righties.

In other words, a lot of this strong performance can be chalked up to better success against RHP. We’ll assume he’ll get better against lefties and worse against righties as the season continues on, but let’s peak into the numbers against right-handers.

There’s a corresponding BABIP spike, but that doesn’t tell us anything we don’t already know. We know he was better, but we don’t know why. He’s swinging more often and making better contact on pitches up against righties. Below I have two heatmaps. One is from 2011-2013 and the other is from 2014. Red is good and blue is bad. These are run values per 100 pitches relative to league average. If that was mumbo jumbo, just understand that he’s more productive than average on pitches in the red zone and less productive than average on pitches in the blue zone. 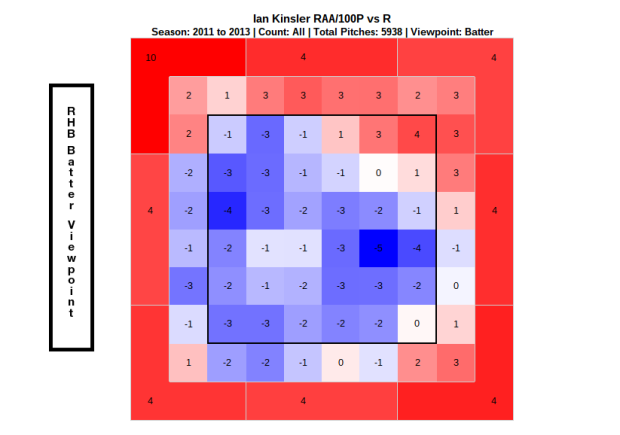 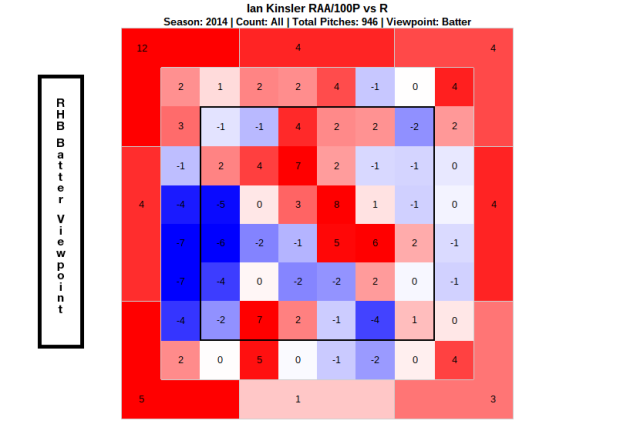 I can’t tell you exactly why Ian is successfully attacking more pitches up and over the plate, but he’s doing so this year. Typically, batters have some difficulty making contact in that area, but right now he isn’t. I’m not ready to provide an answer, but we now have something specific to watch.