I know there’s great irony in posting such a story the day after Miguel Cabrera hit a home run in the All-Star Game against Adam Wainwright in a very difficult park in which to hit home runs, but it’s a necessary post and I’m sure glad I didn’t run it on Tuesday right before Cabrera launched the ball deep to left field.

So far this season, Miguel Cabrera has hit 14 HR in 387 PA. For most human beings, that’s a very nice first half and puts him on pace for close to 30 over a full season. But Miguel Cabrera is Miguel Cabrera. He’s only hit 30 or fewer bombs in a season twice. Don’t get me wrong, he’s still on pace for an excellent season, but the absence of home runs is interesting, even if it isn’t concerning. Right now, he’s hitting a home run in about 3.4% of his trips to the plate, which is the lowest mark since his half season callup in 2003. And plate appearances probably isn’t the right denominator here because we’re not really concerned about all of his trips to the plate, just the ones in which he puts the ball in play. His strikeouts are fine and his walks, while down compared to last year, are still within his career norms. Let’s look at home runs on contact:

When Cabrera puts the ball in play, he’s hitting a home run about 5% of the time this year, compared to numbers that typically sit between 7 and 10 percent. His batted ball profile doesn’t seem to be much different and the actual frequency of hard contact remains pretty consistent. Although, there is some indication that the quality of contact on fly balls has diminished a bit this season, if you look at indicators like fly ball distance and other, less public, data.

So we can chalk most of this problem up to a much lower HR/FB%. And it is much lower this year than in the past: 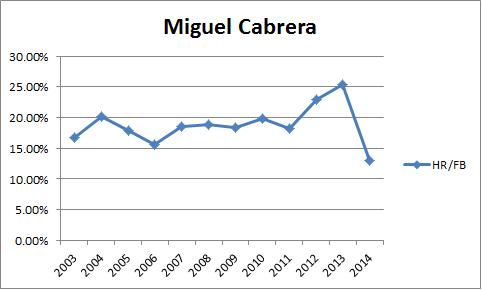 Now what we want to know is if this low HR/FB% is a weird blip or something of an actual trend. It wouldn’t be shocking if Cabrera hit for a little bit less power this year while recovering from offseason surgery. We know he started slow, either because of the injury or because he needed extra time to get his swing back after it, but even since April 22, his HR/FB% is still just 14%, even though he has a 159 wRC+ in that time span.

Cabrera’s saving grace is that those home runs aren’t turning into outs, they’re turning into doubles. He’s on pace for more than 60 doubles and the projection systems think 57 is more reasonable. Either way, that’s a career high by a substantial margin. We often say that young hitters will see their doubles turn into home runs, well the opposite is true for Cabrera right now.

It’s always smart to bet on regression to the mean and that means Cabrera will be fine. Maybe he’s still healing, but those reports are kind of mixed. I don’t think there’s an obvious answer to this question. He’s not enough different to be worried but things are different enough to take notice. Let’s peer into his ISO, and specifically notice the way inside pitch. 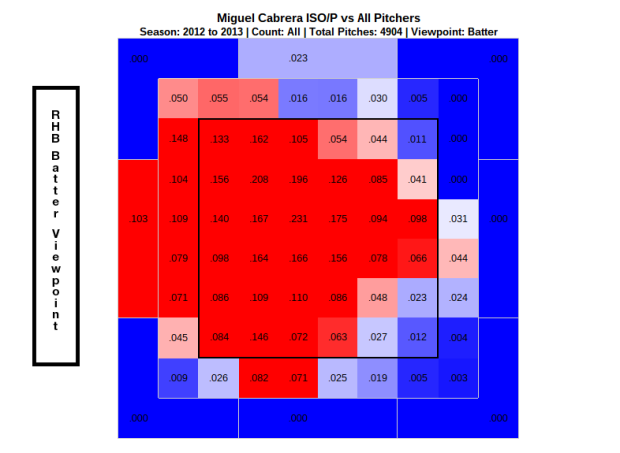 He’s not hitting for as much power on pitches just off the plate inside and that used to be his calling card. That might be a sign of aging, a sign of the injury, or random noise. It’s too early to say, but let’s keep an eye on it and see if pitches attempt to exploit it…and if he makes them pay.