What Happened To David Price’s Strikeouts?

Make no mistake, David Price hasn’t had a bad start to the season. As we speak, he has an 80 ERA- and 82 FIP-, both of which are well above average despite that nasty hiccup against the Yankees on April 22nd. Price  isn’t walking many hitters, he’s not giving up dingers, and his .297 BABIP is just fine. His .291 wOBA allowed is right in line with his career numbers and what he did last year. The results aren’t a problem for Price, but one thing is: what happened to his strikeouts?

Now of course, he’s only about 20-25% of the way into his season and things can certainly change as the season wears on. Right now, Price has a 16.9% strikeout rate, which is 10% down from his career high a year ago and about 5% below his career average. We also know that it doesn’t take that long for strikeout rate to settle in during a season, so the fact that he’s only punched out 17% of the batters he has faced is a little bit of a concern. No one is panicking, but it’s worth exploring a bit.

If you assume last year was a bit of an aberration and that he’s a true talent 22% strikeout guy, he’s 10 strikeouts behind where he should be. If you believe in the 27% rate, he’s more like 20 strikeouts off the pace. Either way, it’s a non-trivial amount, but it’s not so big that you’re automatically assuming it’s a permanent problem.

Hitters are making a little more contact overall, but the key is that batters are swinging more at pitches in the zone and less often at pitches outside the zone. In other words, batters are making better decisions about when to swing against Price. He’s typically been around average when it comes to swinging strikes, although those ticked up a bit last year, but he’s also been quite good in his career when it’s come to called strike rate. No one got more called strikes than Price last year and among qualified starters, only Bartolo Colon had a higher percentage of his taken pitches go for strikes. This year, that rate has Price around 37th in the league instead of second, which backs up our O-swing/Z-swing observation.

Particularly, with two strikes, he’s getting 10% fewer called strikes with about the same swing rate. In other words, they’re laying off the two strike pitches outside the zone and swinging at the ones inside the zone. What’s going on here? 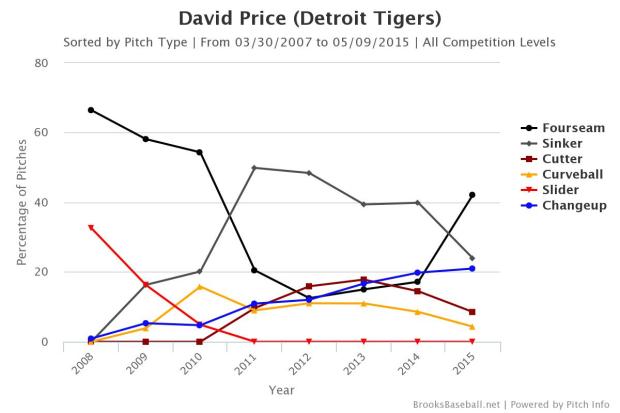 He’s always been a fastball/changeup guy who threw occasional breaking pitches, but this year, he’s relied much more on his four-seam fastball compared to his two seam and cutter. And if you’re wondering about classification, Brooks does hand tag all of the raw data, so it’s not like PITCHf/x is just confused.

If Price is going to the four seam more often, it wouldn’t shock me that batters are making better swing decisions because the pitch moves less and is less likely to slide in or out of the strike zone. If you look at the raw data, they are distinct pitches, especially the cutter. There’s no mistaking a Price cutter for a four seam fastball, and even the two seamer has a good bit more movement.

Again, the results have been fine for Price, so it’s not as if he should be looking to make lots of adjustments, but it is odd how much he’s using the four-seam fastball this year compared to the last four seasons of his career.

My first hunch was that the Tigers changed his approach, but their big thing has always been the changeup and they had him throwing a bunch of those last year. In August and September of 2014, he was throwing his two-seamer and cutter like normal. And then 2015 came and he stopped. In fact, it’s gotten more pronounced as the year has gone forward.

Without being in Price’s head, we can’t really know for sure why he’s started favoring one of his fastballs more than the other, but it’s seemed to track with a decrease in strikeouts through fewer called strikes. It doesn’t necessarily portend a problem for Price, but it is a noteworthy change in his game plan without an obvious explanation.

I could speculate about what I think is going on, but it would all be guess work and that’s not really my cup of tea. I do think it’s interesting that Price went from a guy who threw mostly two-seamers and cutters to a guy who throws a ton of four-seamers coming off his best season as a professional. So far it hasn’t hurt him, but if batters get wise, a four-seamer is usually easier to square up.

This offseason, I came down in favor of a Price extension, in part because I believed in the strikeouts. Now that he’s lost them and is pitching differently, I’m a little spooked. It’s not so much that he’s doing something different, it’s that it’s hard to figure out what led him to make that choice. As with anything, more data will help clear things up, but it’s definitely something to watch as the season wears on.