In an effort to distract us from the crushing weight of six straight losses, we turn to the one positive from Sunday’s game: Justin Verlander. Entering Sunday’s action, Verlander had made six starts in 2016, allowing seven runs twice and allowing seven total home runs. His strikeout and walk rates weren’t terrible, but certainly no one would have argued he had gotten off to a good start. Maybe you weren’t worried, but it’s not like you were totally not worried either.

Verlander went seven innings, allowed no runs, struck out nine, and walked just two yesterday. It was exactly what the team needed from him, even if the rest of the team didn’t cooperate. Even more encouraging than typical results was that Verlander generated 20 swinging strikes after topping out at 14 during his first six starts and hitting a low against Cleveland of just five. In other words, this wasn’t a good luck start, it was a well pitched game.

Now one well pitched game doesn’t a comeback make. In fact, there’s something I noticed when watching Verlander the last two starts that stuck in my mind that could either be a data point in favor of the comeback or against it. It concerns his breaking balls.

Let’s start with the basics. Since developing the pitch, Verlander has slowly shifted his slider above his curve and change as his go-to non-fastball. 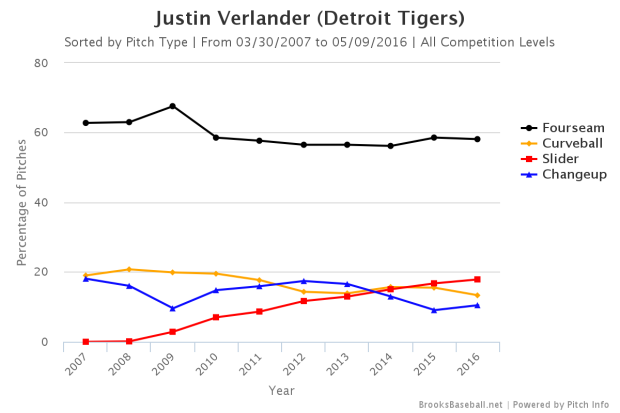 And this year, batters have swung at the slider and curve far less often than they have in the past: 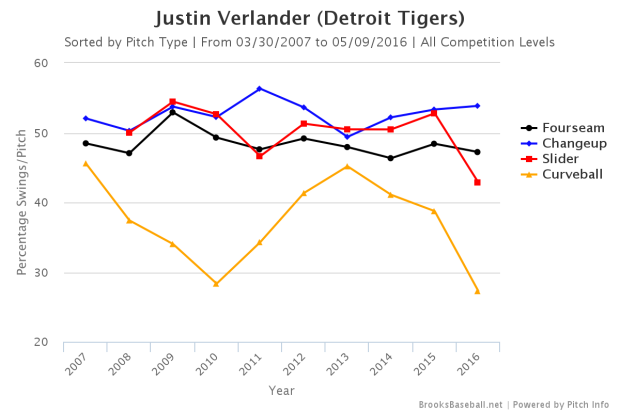 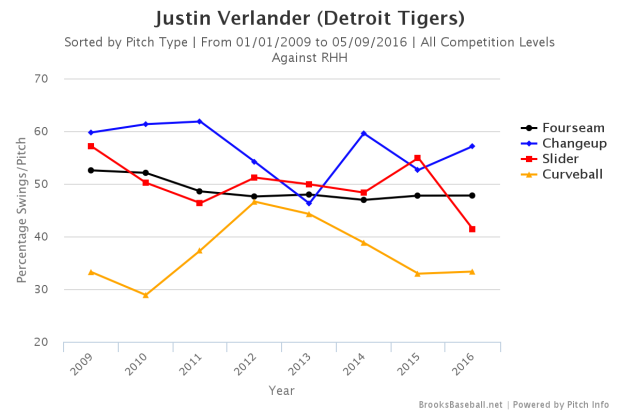 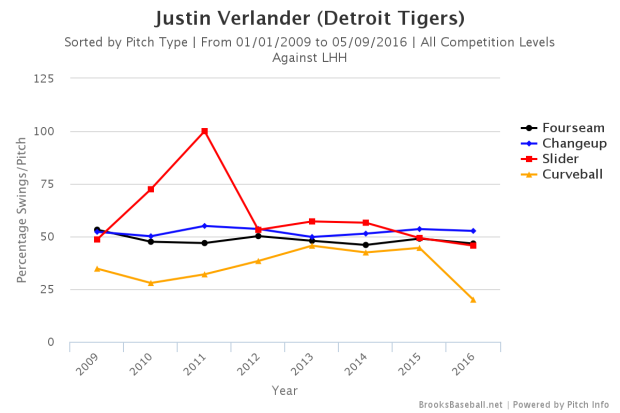 Really any pitcher who throws a slider and a curve will throw the slider more to righties and the curve more to lefties based on the nature of the movement, so it’s not surprising that we’d see the effects split like this by hand, but it is interesting that teams have started to lay off his breaking balls this season in way that we haven’t really seen ever for his slider and in several years for his curve.

Let’s collapse them into a single pitch: 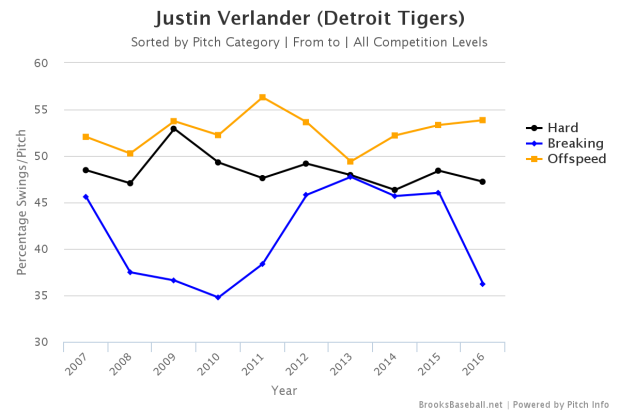 Here’s the thing about this graph, I don’t know if it’s good or bad. It seems like you’d want batters swinging at your breaking balls because that’s where you might get a lot of chases, but some of the best Verlander years occurred when teams didn’t swing at his breaking balls. This is one of the interdependent things that won’t be easy to parse.

Are teams laying off the breaking balls because they’re observing improved breaking ball stuff/usage and want to avoid them. Or are they laying off because they view the fastball as increasingly hittable. It’s too early to talk about results, but the power against his fastball is way up (.286 ISO). This early in the season that’s mostly driven by a couple home runs, so I won’t make too much of it, but this is something to watch.

Are teams signaling that they’re seeing an improved Verlander or a worse Verlander by the way they’re laying off his breaking stuff? I don’t know the answer, but movement-wise the breaking balls do seem a little sharper so far this year compared to last. Hopefully that means teams are pulling back on their approach of ambushing his hangers rather than starting to zero in on a fastball that is becoming exploitable.