In an effort to find to bring a new angle to the routine nature of season previews, last year New English D ran a season preview series based on the team’s nine most pivotal players. We be called the series “2016 Bellwethers,” broke down the players whose 2016 direction would indicate where the Tigers were heading. Due to a solid response, the series is back for 2017. Keep in mind this is not a series about the most important Tigers, but rather the Tigers with the widest range of possible outcomes. You won’t see Miguel Cabrera featured, for example, because of his steady dominance of the league. Enjoy. | #9: James McCann and Alex Avila | #8: Victor Martinez | #7: Whoever Plays Center Field

There’s nothing wrong with having a league average shortstop. Over the last few years, that’s essentially what Jose Iglesias has been. He’s done it in slightly different ways, but he’s been right around that magic two win mark in all three of his full MLB seasons.

But those different ways are important because they demonstrate a path to something more than just an average player. In 2013, he had a 102 wRC+ and in 2015 it was 97. Last year it was 73. Iglesias was able to make up that lost offensive value in 2016 by getting the defensive metrics to like him quite a bit more. I don’t want to litigate exactly how accurate those ratings are at the moment, but the improved defense last year was something I talked about quite a bit as it was happening. Iglesias has always been gifted in the field, but in his previous seasons he had made some mistakes that stunted his value. Last year he was better in those respects and the metrics rewarded him. How much exactly should the needle move is anyone’s guess, but generally the data tracks with the eye test.

If Iglesias had hit like he had in 2015 with 2016’s defense, you’re talking about a 3-4 win player instead of a 2 win player. That’s a big deal, especially for a team on the edge like the Tigers. Step 1 is that Iglesias needs to keep the defensive improvements going, which I suspect he will. He has the arm, hands, and quickness, he was just screwing up the footwork and occasionally losing focus.

Step 2 is getting himself back into that 95 wRC+ range. His strikeout and walk rates have been quite consistent. You can count on him for a 5-6% walk rate and a 10% strikeout rate. He’s aggressive and makes lots of contact, and there’s no reason to think either of those skills are in jeopardy. His power also wasn’t really an issues last year. Don’t get me wrong, he doesn’t have a lot of it, but his extra base hit rate was perfectly in line with what we might expect from him.

I’m not explaining away the BABIP as complete luck, just pointing out that the difference between last year’s Iglesias and a much more compelling Iglesias is a dozen or so outs falling for singles. And while his contact rate was normal last year, Iglesias put the ball in the air a bit more than you’d like to see: 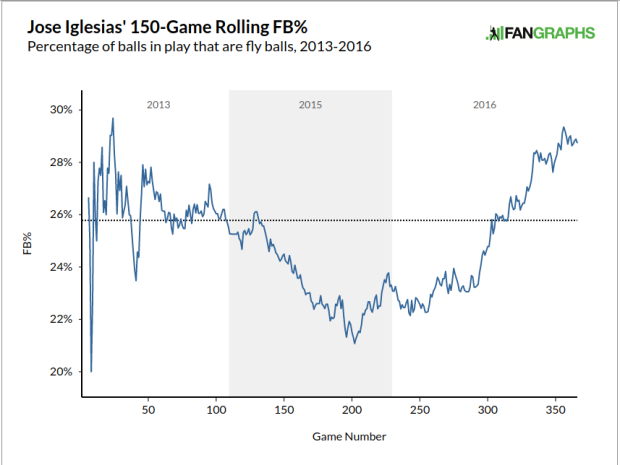 While fly balls are the new trend in baseball, guys who don’t hit the ball that hard like Iglesias need to avoid them as much as possible. Iglesias is going to make his money with ground balls and line drives and he needs to get back to that approach. If he’s able to do that, it seems totally plausible that he could give the Tigers a 1+ win boost at shortstop, helping them make up those few games they needed a year ago.

Certainly his health could falter or his swing could continue to produce too many balls in the air, but if Iglesias can get his bat back to 2015 with his glove staying in 2016, he’ll help the club stay relevant down the stretch.