I’d have said the Astros before I looked it up, but it’s the Angels. The Angels! They’re -37 DRS, -16.1 UZR, -10.3 UZR/150 which are all 30th best in the league. That seems really crazy to me given some of the great defenders they have, but with their overall struggles, some must be leaking into the defensive side. Let’s look. I set the minimum innings to 30 at a position and looked at the leaderboard. Here it is: 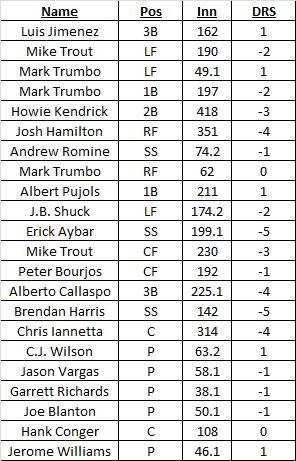 I know defensive numbers don’t stabilize this early, but that’s just not what you want to see for a team that should be pretty good on defense.