Another big night for Porcello.

Earlier in the day, I wrote a very detailed piece about how Rick Porcello (4-3, 70 IP, 4.37 ERA, 3.46 FIP, 1.3 WAR) is becoming one of the game’s best starting pitchers and he took the stage tonight and delivered another stellar outing (seriously click the link, Porcello is awesome). It was brilliant. I audibly cheered in my own home as he pumped fastballs that crossed at the knees and changeups and curves that hitters couldn’t touch. His final line was 7 innings, 3 hits, 0 runs, 0 walks, and 5 strikeouts, to improve on his already impressive season. 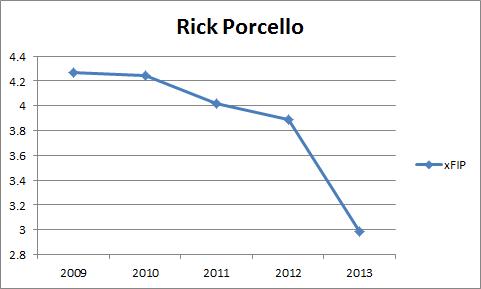 The Tigers struggled to get the offense going until the sixth inning when Jackson walked and the Twins gave Cabrera an intentional pass that set up a Fielder two run double, which set up Martinez and Peralta RBI doubles to give the Tigers a 4-0 lead. They wouldn’t need anything else as Porcello cruised to victory, the bullpen did the job, and got the Tigers to 37-28 on the year. They’ll look to take the series tomorrow with Anibal Sanchez (6-5, 78 IP, 2.65 ERA, 1.78 FIP, 3.3 WAR) taking the hill after missing his last start.

Posted in: How Was The Game?, Tigers Posts | Tagged: detroit tigers, how was the game, MLB, Tigers, twins