Twenty seven days ago, I wrote a piece entitled “Rick Porcello is Breaking Out” in which I said the following:

Put this together and we have this story: Rick Porcello is striking out more batters than ever, walking fewer batters than ever, getting more groundballs than ever, and is allowing more homeruns per flyball than we would generally expect. All of this points toward the 24 year old having his best season to date.

Since then, all Porcello has done is prove me right. I don’t mean for this to be about me or my predictive success, I mean it to be a validation of how Porcello was showing signs that he was having his breakout campaign. Now it’s clear that he is.

Let’s take a quick look at his numbers over the last 30 days.

Those are great numbers. All-Star, Cy Young type numbers. Over the last 30 days, Porcello’s 2.14 xFIP is the best in major league baseball and his xFIP this season is 7th best in MLB despite his rough April. This is no longer the Rick Porcello who is a really good #5 starter, this is Rick Porcello the really good starter.

Let’s update where Porcello stands. His K/9 is far and away the best of his career as is his BB/9.

When you translate his numbers into FIP and xFIP, it looks like this:

But it isn’t just the strikeouts and the walks, it’s also the groundballs. Rick Porcello isn’t trading groundballs for strikeouts, he’s actually getting more of both.

Everything is trending in the right direction for Porcello. More strikeouts, fewer walks, more groundballs. He’s gone from very good #5 starter with some upside to a one of the game’s best starters over the last month and a half. In fact, his particular combination of strikeouts, walks, and groundballs is quite rare and extraordinary.

He’s striking out more than 7 batters per 9, walking fewer than 2 batters per 9 and has a groundball rate above 50%. From 2000-2012, here is the list of pitchers who have finished a season with that mix: Halladay (4x), Carpenter (3x), and Hamels (1x). In 2013, the pitchers on that list are Felix Hernandez, Doug Fister, and Rick Porcello. That is some excellent company.

If we push the limits farther, to 7.5 K/9, 2.0 BB/9 and 55% GB (which Porcello has) the list of pitchers since 2000 to accomplish that feat drops to zero. Nobody. We don’t have groundball data from before the early 2000s, so I can’t tell you how rare this is in MLB history, but since the data became available, it’s never been done.

Porcello is mixing strikeouts, command of the zone, and groundball induction in a way that has never been done before. You may look at his ERA or even more foolishly his W/L record and think he’s the same old guy, but he’s actually nothing close to it. He’s turned himself into a star.

And this isn’t some fluke stretch that happens to him everyone once in a while. This is his K/9 by month for every month of his career: 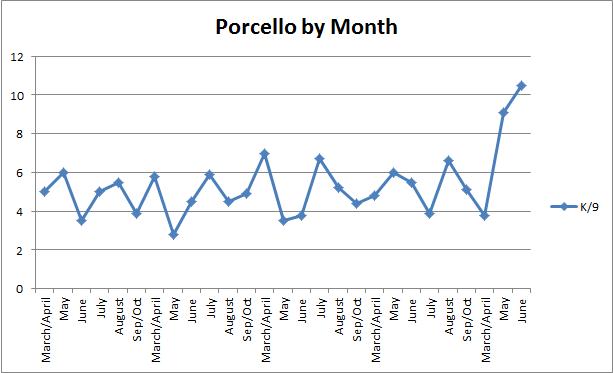 Porcello is a noticeably different pitcher. And he’s doing it by dropping the slider, cutting back on the fastballs and using curveball and changeup more often.

It’s all working. You can see the change in his approach is coming from a changeup and curveball that are moving more and have bigger separation from the fastball by velocity. 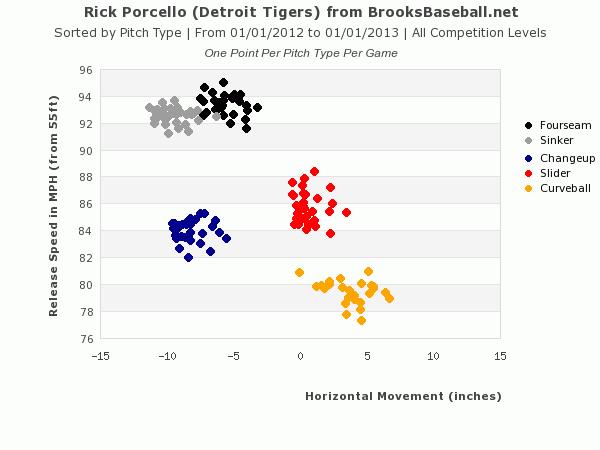 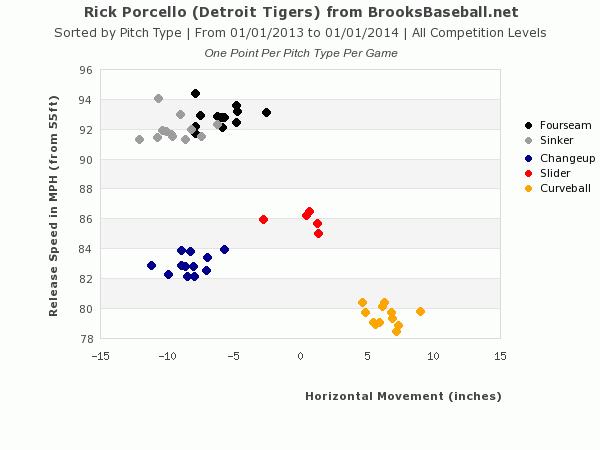 This is all by way of saying that Rick Porcello is getting much better results over the last two months than he ever has before and that it is the result of real change in his approach to pitching. I’ve always believed this breakout would come. It’s true, you can ask friends who suffered through my lectures on him. Everyone looked at Porcello in 2009 and saw a young kid with big time prospect status. But he didn’t develop that fast and he started to get tagged as a bust. But the mistake those critics made was that Porcello got to the major leagues so early that they didn’t realize he was still developing. His training for big league baseball was all on the job training.

Consider this. Rick Porcello is in his 5th year in MLB and has made 131 starts (120 entering 2013). When each of these pitchers turned 24, they had this many starts: Doug Fister (0), Anibal Sanchez (23), Justin Verlander (32), Max Scherzer (3). Rick Porcello has more starts before his 24th birthday than all four of his rotation-mates combined. Doug Fister, Max Scherzer, Anibal Sanchez, and Justin Verlander have all played the vast majority of their major league careers over the age of 24. Porcello has played almost the whole thing below 24. Think about how much those pitchers have grown since they turned 24.

If Rick Porcello can develop at a rate even remotely close to that which his teammates have, he could be one of the best pitchers in the baseball across the late 2010s. Heck, over the last two months he already is.