Coming off three straight wins the Tigers rolled into Cleveland and had no trouble putting them away. The bats scored early and often, crossing the plate in four separate innings totally 7 runs with Dirks and Martinez in the center of the attack, but Rick Porcello (5-6, 93.1 IP, 4.82 ERA, 3.55 FIP, 1.7 WAR) was the story as he turned in 7 shutout innings of 5 hit, 2 walk, 6 strikeout baseball and pitched in almost no traffic all night long. He gave up a little bit of hard contact, but those turned into outs quickly and he didn’t let one baserunner turn into four baserunners as he sometimes does when he’s off his game. He had all his pitches working and went to the breaking ball and offspeed stuff very effectively, making him look more like the dominate, potential front-line starter he was during May and early June (a breakdown here). He is 8th in major league baseball in park adjusted xFIP-. Here’s are important graphs on the subject, first regarding his strikeout and walks rates and second regarding his varying fastball and excellent curve: 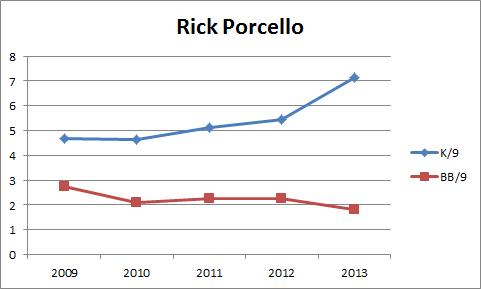 The Moment: Porcello strikes out 6 on his way to 7 scoreless innings.

Posted in: How Was The Game?, Tigers Posts | Tagged: detroit tigers, how was the game, indians, MLB, Tigers