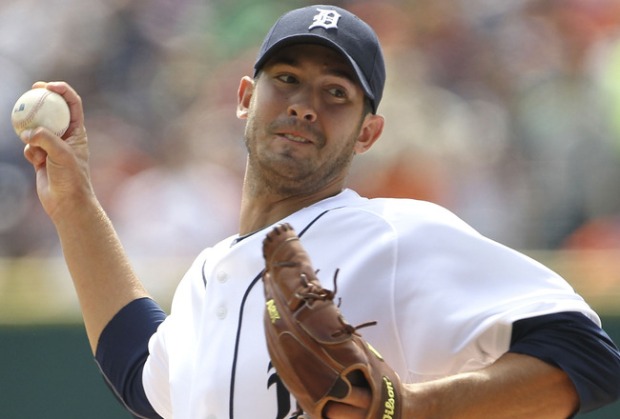 It was just a couple of months ago that I wrote about Porcello’s breakout season and then I did it again as he broke out even further four weeks later. This was the year that Rick Porcello made the leap from really good #5 starter to really good starter without the numerical qualification. He’s been scratched from his final scheduled start tonight to get ready for his postseason role out of the pen, so it’s time to look back on his season. It was an excellent campaign for the 24 year old right-hander and it’s only a sign of things to come.

Right off the bat, it’s worth noting that these numbers would look even better if the Angels didn’t possess some sort of Rick Porcello kryptonite, as he participated in two blowup starts involving that opponent. But I won’t drop those starts out because you don’t need to drop those two starts out to demonstrate Porcello’s ascendancy into the upper ranks of AL starting pitchers. (19th in WAR, 6th in xFIP, 17th in FIP in the AL)

It’s well documented that Porcello scrapped his very troublesome slider for a curveball and started throwing the changeup more often this year. It’s also worth noting that he is 24 years old and has 149 MLB starts under his belt. Pitchers tend to peak in their late twenties and here Porcello is a year away from free agency and he won’t be 25 until two days after Christmas. Which is to say, there’s more development coming. Verlander didn’t become VERLANDER until he was 26. Scherzer came even later. Rick Porcello has loads of MLB experience ahead of his prime and things are looking great.

Let’s start with his strikeout and walk rates over the course of his career, both per 9 and as percentages of total batters faced: 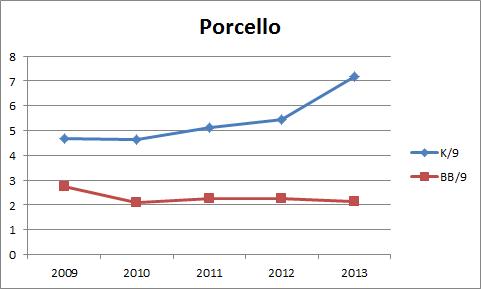 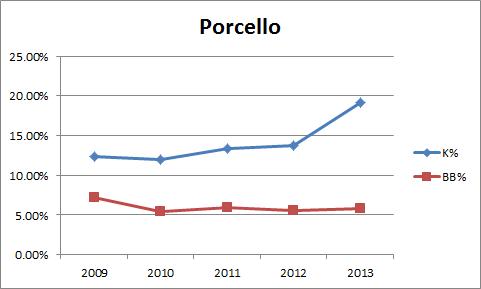 So what we have here is a pitcher with a very low walk rate who went from modest strikeout gains every year to a huge leap in strikeouts this year. And if we’re talking strikeouts, it gets better if you look month to month. Porcello had some fluctuation this year, but he had four months that were as good or better than about every month he had previously in his career. Only July stands out, because as we documented in earlier work, Porcello’s breakout came after his disaster start on April 20. This is the new Porcello:

He’s also seeing an uptick in his ground ball percentage. 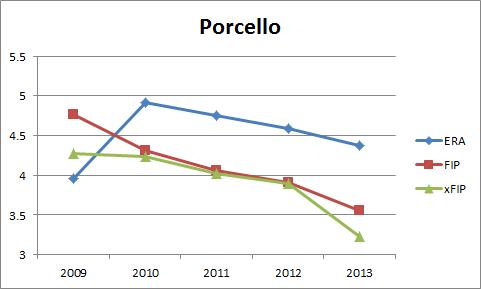 Porcello’s ERA is always going to look on the high side if he plays in front of a poor infield defense like the Tigers (Iglesias will help big time), but he’s lowered it every season in conjunction with better peripheral numbers. He doesn’t walk people, he dramatically increased his strikeout rate, and he gets a ton of ground balls, which are good because ground balls don’t go for extra base hits nearly as often as fly balls.

But it’s more than his ability to keep guys off the bases with his new found love of the strikeout, it’s what’s happening even when he allows a ball to be put in play. He’s allowed the lowest slugging percentage against of his career. His well-hit average against is the lowest of his career and the same is true of his wOBA against.

Not only is Porcello striking out more batters, he’s also inducing weaker contact when batters do manage to put the ball in play. He’s getting better results, too, and he’s still just 24. Let’s look at Verlander and Porcello side by side through their age 24 seasons:

That’s right, Porcello had a better FIP and xFIP through age 24 in twice as many innings as the great Verlander and he has a higher WAR through age 24 as well. It’s often difficult to realize that while Porcello has been around forever, he’s also just a kid. He’s done more before his 25th birthday than Verlander and Verlander just signed a $200 million contract. A lot can happen from 25-30.

Well, then. Justin Verlander got way better after his 25th birthday. He increased his K/9 by 2 and dropped his walk rate a bit, which turned into a lower ERA, FIP, and xFIP despite the same BABIP. He increased his innings per start from 6.2 to 6.8 and became the best and richest pitcher in the sport.

I’m not saying Porcello’s going to be Verlander. Not at all. But he’s going to be really good because pitchers who are this good when they’re young (and who stay healthy) get better when they hit their prime. Porcello’s prime is still coming. He’s never missed a start due to injury and he’s making the kinds of progressions that we’d expect to see from a pitcher developing into a star.

When I wrote back in June about Porcello’s breakout I made very similar comparisons and used very similar looking graphs. It all looks the same today. This wasn’t a month long blip. This was a real thing and it’s about to get even real-er. Porcello will be 25 next season and entering his walk year. The Tigers have a lot of big contracts promised to their high end talent and Cabrera and Scherzer are both looming extensions coming in the next 24 months. But Cabrera is 30 and Scherzer will be 30 next summer. Rick Porcello is 24.

This may sound strange, but Rick Porcello is the guy you lock up. Maybe they’ll pay Scherzer and Cabrera too, but Porcello is the bet to make today. A long term deal buys his late twenties – his prime – instead of paying Scherzer and Cabs for their thirties, and it’s time to strike before the Rays, A’s, and Red Sox get their sabermetric claws out. The Cubs are going to be looking to contend in 2015. So are the Astros. That should scare you if you’re a Tigers fan because I promise you those teams see the value in Porcello. You can’t let him get away because he’s good and he’s young. The Tigers need to sign Porcello to a 5 year deal tonight while he’s watching Jose Alvarez fill in for him as he gets ready to move to the pen for the playoffs.

Porcello is unquestionably baseball’s best 5th starter. It’s what makes the Tigers great and it’s what will make the Tigers great for years to come, except in two years he won’t be the #5, he’ll be the #2. This season was Porcello’s breakout and it’s been a joy to watch. We’ve seen his last start in 2013, but if the Tigers are smart, we’ll have years more to enjoy.