Let us begin to look forward first by looking back. During the first “half” of the 2013 season the Detroit Tigers were baseball’s best pitching staff with 17.1 WAR (what’s WAR?), a 3.26 FIP (what’s FIP?), and a 3.35 xFIP (what’s xFIP?). In fact, their starting rotation, when adjusting for park and league average, is the best starting staff in MLB history at 76 FIP-. The offense didn’t turn in an historic first half, but they were excellent, posting an MLB best 114 wRC+ (what’s wRC+?) and the fourth best position player WAR at 17.1.

There’s pretty much no case to be made that the Tigers aren’t one of baseball’s best teams so far, and there is no indication that will slow down in during the season’s final two months.

Some may fret that the Tigers are only on pace for 90 wins and that the Indians are hanging around their heels, but the Tigers have done this in each of the last two seasons and rode a strong final few weeks into the postseason. This is a veteran team that understands how to deal with the fatigue that comes in the dog days of August and should have no trouble coasting into the postseason.

They’ve had some bullpen issues, but with Valverde out of the mix Leyland is no longer intellectually trapped into using the wrong relief pitchers and is routinely turning to Smyly and Benoit in big situations. He has other talent down there and if Rondon can isolate his rough days, the Tigers should be able to hold together a reasonably good ‘pen with only a minor addition or two in late July.

The Tigers have obviously been lifted by an amazing season by Miguel Cabrera (205 wRC+) and more solid performances by Jhonny Peralta, Austin Jackson, and Omar Infate. Hunter and Fielder have had their issues, but have generally been contributing on offense well enough to make it work. Dirks hasn’t hit, but he’s played great defense and Tuiasosopo has given the Tigers 100 amazing PA out of nowhere. Avila has struggled, but has shown signs of life since coming off the DL.

The key to it all, likely is Victor Martinez, who was extremely unlucky on hard hit balls early in the season and has somehow managed to shake the curse over the last six weeks and has returned to form. If he keeps it up, the Tigers will be swatting away the competition with very little effort.

The Tigers have an all-time great starting rotation, the league’s best offense, and a bullpen that can do no worse than the did during the first half. The defense isn’t great, but the good pieces can carry the bad ones far enough. They should coast to an AL Central title barring any sort of significant injury, or ehem, suspensions. Since that seems too clear, let’s consider what the team has to do down the stretch to set themselves up for October success.

One of the most interesting issues for the Tigers going forward will be how they handle left field. Currently, they are running a platoon with Dirks (who is a great defensive player this season) and Tuisasosopo (who is crushing like he’s Cabrera). It’s been a very effective tandem that has combined for a 9.0 UZR and .341 OBP while in LF. Alone, neither is a player worth blocking a top prospect for, but together they’ve been quite the weapon. Lurking, however, is Nick Castellanos who is offering a .281/.353/.455 line in Toledo and is probably MLB ready. How the Tigers work this situation will be key for their long term success. There is no sure way of knowing which move will give the Tigers the best shot at playing well for three weeks in October, but if they Tigers plan to test the Castellanos waters, they should probably see what they have sooner rather than later so they can correct any problems.

The Tiger bullpen gets a lot of grief, but Benoit and Smyly are two of the best couple relievers in baseball this season and the unit as a whole is respectable in most statistical categories. Without having to worry about Valverde blowing easy leads, the Tigers are actually in pretty good shape. They have a great pair for high leverage situations and have Rondon and Alburquerque who can shut hitters down with the best of them if you’re willing to accept the occasional meltdown. Phil Coke is better than he’s pitched, but even if he can simply get himself on track to shut down the occasional lefty, things should be fine for him. After that, you’re looking at a mix of Putkonen, Reed, and Downs (when healthy) to handle the lower leverage moments. I think all of those guys are solid options at the 6 and 7 spot in the pen and Downs has shown flashes that he could be something more. If the Tigers could just add one middle reliever who you can trust to give you consistent innings in 3-4 run games or to spell Benoit or Smyly in tight games, they should be all set. Dotel was supposed to be that guy, but he hasn’t thrown an inning since April and likely won’t be back any time soon. Jesse Crain would be a great addition, but the Tigers probably don’t even need someone that effective. Anyone reasonably competent without big platoon split will do.

Prince Fielder (123 wRC+) isn’t having a bad season, but he’s not having a Prince Fielder season. He’s had ups and downs in his career and usually bounces back, but the Tigers are going to need a strong push from their slugging 1B if they’re going to be playing when the leaves turn brown. 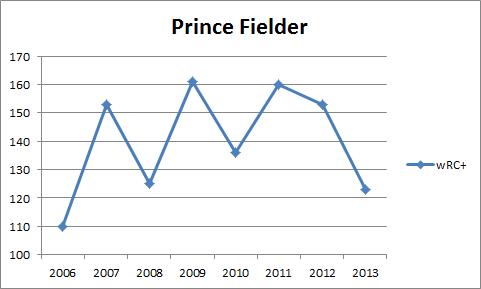 I’ve been pretty clear about Martinez being unlucky early in the season on hard hit balls and fully expecting things to even out. They are evening out right now. No one touch anything. Don’t tempt fate. Don’t even sneeze around VMart. He’s back to his old ways. Don’t be the one who screws it up.

JV is having an excellent season by normal pitcher standards. He’s 9th in WAR for crying out loud. But by his standards he’s a little below where you’d like him to be. Accept that he’s getting older and won’t be as consistently brilliant all the time. Stop trying to get him to tinker and stop focusing on his issues. He’ll figure it out and even when he’s not “his normal self” he’s better than almost everyone.

Avila was lost at the plate before going on the DL and has picked up a bit since coming back. You’re not going to get great production from Alex at C, just focus on good game calling and marginal offensive improvements. This is a great offense without him, just get him playing a little better and everything will be fine.

7. Keep Everyone Else Healthy

Peralta and Infante are having great seasons and Hunter is doing a serviceable job in RF. You don’t need these guys killing themselves out there every day to try and win 100 games. Give them plenty of rest and make sure they are performing at their best into October.

8. Just Get Out of Cabrera’s Way

This one’s easy. He’s the best hitter in the game, potentially on track for an all time great season. Just let the guy do his thing and enjoy.

9. Think About The Bench

The Tigers are in a tricky spot running their LF platoon because it gives them a bench that consists of the left fielder who isn’t playing and Kelly, Santiago, and Pena. Kelly is having a good season as a reserve (109 wRC+) and Pena is a necessity, but if the Tigers have to carry a middle infielder, you’re stuck with Santiago. This isn’t a problem for a long season, but they could use another bat off the bench in October and if Dirks isn’t swinging they are somewhat limited. You’d like a lefty power bat in place of a relief pitcher for the postseason, but the trick is where you find one. Lennerton is doing well in Toledo but doesn’t seem to have the attention of MLB minds and the Tigers don’t have anyone else in the system who fits the profile. You can pick a guy like that up in a deal, but to do that you have to have a roster spot that the team currently doesn’t have. It’s a bit tricky to make work with their current defensive game and it’s something worthy of consideration.

All in all, the Tigers are poised for a big second half and should have little trouble making the playoffs if everyone stays on the field. They have a great staff and offense and have been in this situation before. They need to prepare themselves for the grueling playoff push as they have hopes of winning four additional games and throwing a parade in early November.

It’s been a fun season and I’m looking forward to the last few months. If you’re new to the site, welcome. This is a place to both think analytically and to relax and enjoy. Baseball is fun. Go Tigers.

10. Brookens sends Martinez home and instead of being tagged out by 30 feet, Victor just turns toward the dugout.

9. Verlander heads to the other dugout entrance to avoid the Handshake of Doom.

6. Sanchez takes a no-hitter into the 9th.

5. Victor Martinez makes a circus play against the Red Sox.

4. Brayan Pena tags out Nick Swisher on a ball Swisher thought was foul.

2. Max Scherzer strikes out Chris Davis with the bases loaded.

1. Brayan Pena absorbs a tackle from Justin Smoak to secure a 14 inning win in Seattle.