A loss, but with one heck of an exclamation mark.

The Tigers got to Chris Sale for two early runs courtesy of a Cabrera bomb and a Pena double, but a 3 run 5th inning doomed Doug Fister (24 GS, 155 IP, 3.60 ERA, 3.34 FIP, 3.2 WAR) and the Tigers thanks to a couple of goofy plays and some poorly timed control issues from Fister. He didn’t pitched terribly, going 6 innings and allowing 4 runs, but after three strong innings to start the game he played in traffic for most of the night. The bats had a great chance to get to Sale in the 6th as Cabrera and Fielder hit back to back hard singles, but a FC by Martinez and a fly out to the wall in center by Tuiasosopo kept the Tigers from cashing in. The story, however, was a ridiculous play by Jose Iglesias. Here is a link to a video and here is a link to a GIF (h/t @Sporer). Below is a screen shot of the basic concept. It was stupid good. 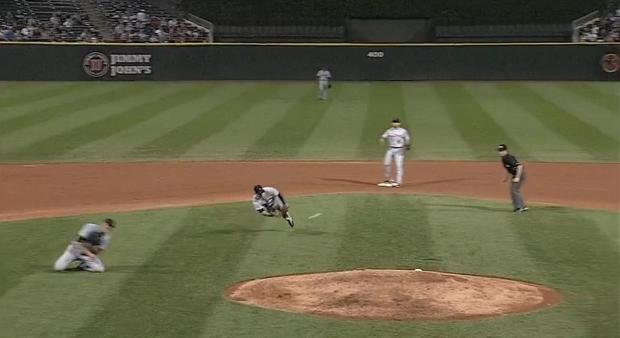 The Moment: Jose Iglesias does something that the author has a difficult time describing.

Posted in: How Was The Game?, Tigers Posts | Tagged: detroit tigers, how was the game, MLB, Tigers, white sox