Alex Avila had a really rough first half of the 2013 season. He had a 60 wRC+ before the All-Star Break and dealt with a wrist injury in addition to innumerable foul balls. In the second half, he was much, much, much better, posting an impressive 140 wRC+ along with far better swings at the plate. This swing, chronicled as our 17th best moment of the 2013 season was one of the big turning points in his season, not just in result, but in approach. This was a classic Avila blast to left-center.

The stage was set quite nicely for the 26 year old backstop as his battery mate, Anibal Sanchez had tossed 7.2 very strong innings in which he scattered just two runs. Which brings us to the top of the ninth inning in Cleveland. At this point, the Tigers were three games up on Cleveland entering a four game series at Progressive Field. They were in control, but a bad series would make it a horse race and a good series could be a dagger. Losing the first game wouldn’t have been devastating, but snagging it from the jaws of defeat was a two game swing in a matter of minutes.

Fielder led off with a double to left. Martinez singled to left and scored Prince to make it a 2-1 game. Perez pinch ran and Dirks worked a walk. 2-1, no outs, top of the ninth. Alex Avila comes to the plate. The leverage index was over 5 meaning that it was a huge moment in the game (the average LI is 1) and Alex took the first pitch for a ball. 1-0 count, here’s the pitch from Perez.

Avila crushed it to left. Tigers take a 4-2 lead. The Tigers had a 15.5% chance of winning the game when the inning started and were now all the way up above 93%. Avila’s blast capped an assaulting rally that helped the Tigers bury the Indians for good. Obviously both teams would have done differently things down the stretch had this game played out differently, but the Tigers won the division by a single game. And this was a pretty dramatic way to do it.

I think my downstairs neighbor is still recovering from how loudly I jumped up and down when Avila hit this one out. 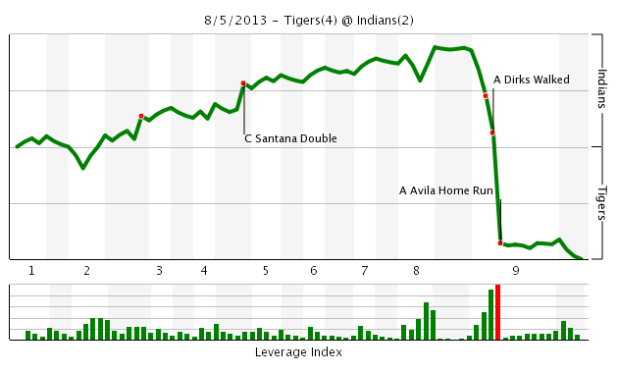