This single GIF betrays the drama of the moment. It’s hard to describe it, because looking back it was just some game with the Tigers leading by two runs. They were nine games over .500 and stuff, but I can’t circle back to what made it so awesome. Chris Davis was CHRIS DAVIS at the time and Max was MAX, but the rest of it was just another game. It was a fine battle I suppose; a seven pitch at bat. Max went away with heat, got a called strike on a changeup away, and then got a swinging strike down the middle. He was ahead 1-2, went away twice to bring it to 3-2 and then Davis fouled off a changeup. Then this happened, the crowd went crazy, and the Tigers cruised. Maybe this was Scherzer’s national coming out party because it was “win” number 10. Maybe it was the eyes of the country on our star while facing the mighty Davis in a big spot. Whatever it was, it was something. 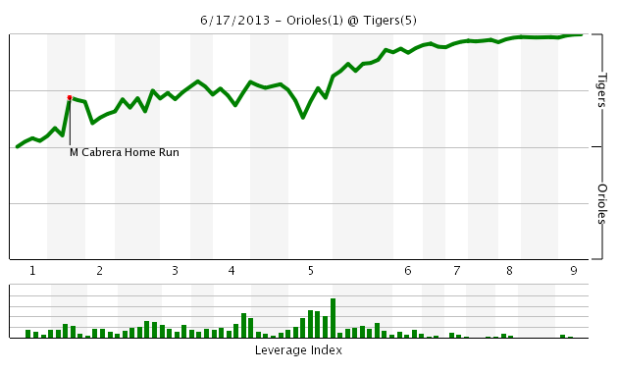