There’s a point during every season in which you fall in love with your team. That’s how I’ve always thought about it. Each year, you have to grow to love the particular character of that incarnation of the club and this is the game that did it for me in 2013. It was my birthday, the Tigers were out west, my wife had gone to bed because she “has a job,” and Scherzer was facing Felix. It was a pitchers’ duel for the ages (my favorite type of game) and the defining play came with a perfectly executed relay throw from Hunter to Fielder to Pena who caught the ball up the line and absorb eda huge blow from Smoak. I’m no fan of collisions at the plate, but this was unavoidable based on where the throw was. Smoak had nowhere to go and Pena took the brunt of it, held on, and the Tigers won a thriller at 3am back east. I stumbled around in a daze the next day and a started a post called “Pena, Scherzer, and Falling in Love” that I never ran. Nothing needed to be said, and it still doesn’t. 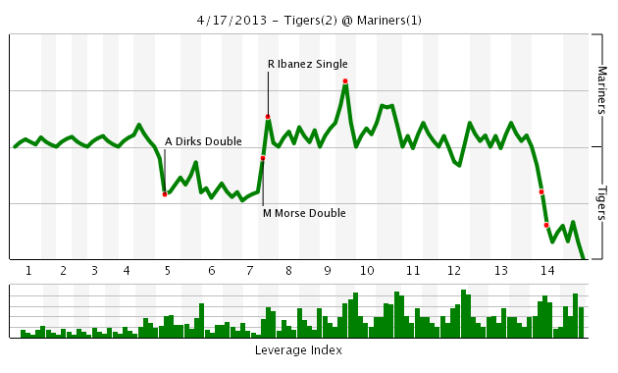