Today we’re kicking off a new series for the offseason that allows us to look back a player’s 2014 season and then ahead at their 2015. The series is called GIFGRAPH, as it will feature one GIF and one GRAPH that captures the player’s season and their value to the team. The series will feature all players who will figure prominently on the 2014 and 2015 clubs.

It’s hard to say for sure whether the Prince Fielder or Doug Fister deal made bigger news last winter, but that’s a silly question to spend lots of time trying to answer. It’s clear that the Tigers came away massive winners in the first deal, at least as it pertains to 2014, and likely as it pertains to everything that will ever happen to the franchise forever and ever. “Won the trade,” is how the phrase goes.

But what was it that made Kinsler so useful to the club? Obviously, Fielder’s injury made it a decisive win, but let’s assume we live in a world in which Fielder performed as advertised and gave the Rangers 3-4 wins of value thanks to a powerful left-handed bat. How did Kinsler make such an impact?

Sure, he was a solid offensive performer (102 wRC+), but he’d been just about this good for the last couple of years and Prince would obviously have been better if healthy.  Two things stand out about Kinsler’s 2014 season. The first was his terrific base running (9.1 BsR), but the second, and our focus here, was his superb defense at the keystone.

Kinsler is an average hitter, but with some good base running chops and durability, you know you’re getting a solid major league player. What the Tigers didn’t count on, to this degree, was how his defense would vault him from good player that is cheaper than Fielder and allows Cabrera to play first to one of the most valuable players in the game. His defense was simply terrific.

He’s had these seasons before, with 3-4 great years by DRS and 2 great years by UZR entering the season, but you don’t always expect it to continue into a player’s thirties, especially once you get him around the defense allergic Tigers.

But he did. Kinsler posted a 13 UZR and 20 DRS at 2B, nearly winning the Fielding Bible award for the best glove at the position. He helped the Tigers pitchers worry less above ground balls, especially Porcello, and produced 1-2 wins of value for the Tigers above average at the position.

He did so by offering range at the position and solid glovework, something Infante was okay at and they couldn’t find in a post-Polanco world, otherwise.

Most interestingly, one could argue that Kinsler had the best defensive season at the position for a Tiger in the modern statistical era (2003-present). There’s not a ton of great competition, but the Tigers brought in the best defender they’ve had at the position, potentially, since Dombrowski took over more than a decade ago. 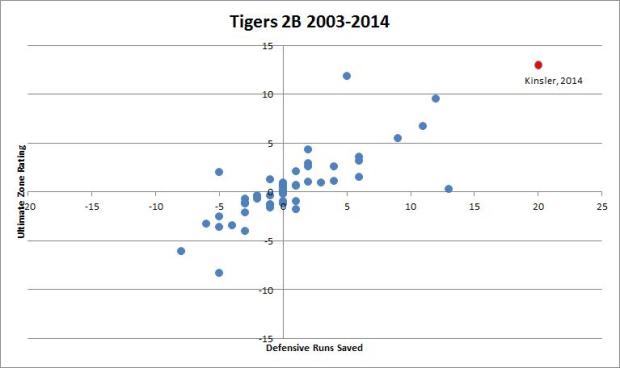 Kinsler’s 5.5 WAR season was a big reason the Tigers made it to the post-season and while the projections don’t expect another dazzling defensive year, they like his skill set enough to expect 3.8 WAR for 2015.

The Tigers won the trade.