Last season, James McCann’s overall production wasn’t very good. Granted, he was a 25-year old catcher in his first full MLB season, so we don’t want to bury him for not being a superstar. In 2015, McCann had an 85 wRC+ in 425 PA to go with his 1.0 fWAR. His arm was on display on numerous occasions even when his bat slumped as the year went on. A 1 WAR year for a rookie is nothing at which to sneeze, except for the fact that FanGraphs WAR doesn’t include catcher framing (the ability to get strikes on borderline pitches) and McCann rated extremely poorly according to the models provided by BP and StatCorner.

To remind you, BP had McCann at -16.6 framing runs and StatCorner pegged him at -15.6 framing runs. BP’s model is more nuanced, bu given that both models agree, we don’t need to dive too deep into the differences. McCann cost the team about 15 runs last year based on his difficulty receiving the baseball. That works out to -1.6 wins, turning the back of the envelope WAR value into a paltry -0.6 WAR for 2015. Uh oh.

Now, I wrote last season that I wasn’t worried about McCann’s early framing numbers because there are a lot of reasons why a catcher might struggle out of the gate without being a lost cause. In fact, this year McCann is at +0.6 runs via BP and +0.8 via StatCorner. That might not seem like a great number, but on a per pitch basis, he’s improved from -0.016 called strikes per chance to +0.003 according to BP. That’s a 17-18 run difference over 7,000 chances, which equates to a 1.8 WAR difference (approx). In other words, if you put 2016 McCann framing on 2015 McCann, you might have 1.2-1.4 WAR player instead of a -0.6. Big difference.

That’s a long way of saying, McCann’s framing numbers have been much better over the first ~month of his 2016 season. There are a lot of framing chances in a season, so the sample stabilizes quickly enough that it’s not like we’re dealing with an irrelevant sample. It’s far from determined, but it’s not like we’re looking at HR in a month compared to HR in a year.

To walk through this, I want to break the numbers down a bit rather than just showing you the bundled up BP/SC numbers. Communicating framing in runs is useful, but it’s also difficult to grasp in some cases. Let’s start with the MLB strike zone. Keep in mind, this is not the strike zone as it’s called, it’s the strike zone as defined. Fortunately, for our purposes, we’re comparing two similar seasons so it won’t be a big issue.

This is from the catcher’s perspective.

If you just look at in/out of zone strike rate on all non-swings, McCann is getting 2% more strikes in the zone and 0.5% more strikes out of the zone. Keep in mind this is against RHH and LHH and there are no controls for ump/count/etc. Those things matter and they’re folded into the BP number, but this is meant to unpack.

If McCann had the 2016 rates based on his 2015 total pitches caught, we’re talking about a difference of 68 strikes. At a rate of 0.13 runs per strike, that’s a 9 run increase if you’re only looking at zone/out of zone and not paying any attention to where the pitches really are on the grid.

Let’s go a step further. Here are the percentage differences by zone. Use your imagination to draw the lines for the four out of zone boxes.

McCann is improving greatly on glove side pitches at the expense of his performance on his throwing side. Granted, the gains are large enough to offset the losses, so there’s a net gain. Let’s look at McCann vs the league by percentage. The league baseline is 2015 in both cases. 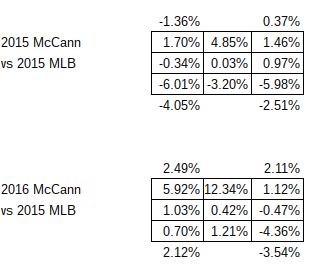 He has improved dramatically in the places he’s improved and the losses down and away are much smaller.

Now of course, none of this will matter if McCann doesn’t find his bat in 2016. A 5 wRC+ isn’t something you can survive no matter how good you are on defense. And there’s also no guarantee his framing won’t regress because we’re not totally sure what’s causing it. He’s catching lots of new pitchers and hasn’t seen nearly as many different teams and umpires as he did last year. There’s a lot of season left, but the early returns are really encouraging.