To regular readers it will come as no surprise that I’m part of the movement to remove the pitcher won/loss record from our baseball evaluations. I’ve written on the subject quite a bit, both with respect to individual seasons and entire careers, and this piece seems like a perfect fit to round out the discussion. It also helps that I got a direct request for this exact thing after I posted yesterday’s piece:

So what follows are The Nine Worst 20 Win Seasons in MLB history. It gets a little tricky to draw lines here, so let me give you a quick primer. I don’t want this post to be about pitchers who made a lot of starts so they got a lot of wins, but rather about pitchers who performed poorly and still got wins. Therefore, instead of using Wins Above Replacement as I did for the under 9 list, I will be using ERA- and FIP-, which are simply statistics that calculate the difference between a pitcher’s ERA or FIP and league average during that year. Also it controls for park effects, but it’s basically a way to compare an ERA from the deadball era to one from the steroid era.

I would personally prefer to see this done with FIP-, because it better reflects a pitcher’s skill, but I’m going to use ERA- as well so that this piece is more convincing. A pitcher who allows a lot of runs shouldn’t win a lot of games, and you should agree with that if you’re old school or new school.

Additionally, I’ve included lists from 1901-2012 and just 1945-2012 if you’re concerned about the number of starts inflating someone’s win total. That’s fair, so I’ve broken it down into four separate lists, all telling you the same thing. You can have a bad year and win 20 games. 20 games is the old school gold standard of performance, so this cutoff makes sense. If you’ll recall, there have been more than 8,000 qualifying seasons in MLB history and if you try to predict WAR, ERA, or FIP with wins, you get an adjusted R squared of less than .40 in all cases. This isn’t just about a few examples, it’s about the entire population of starting pitchers. For more on this, read the two links above and check out the bottom of this piece.

And now again with FIP-

Even when we limit the number of innings a pitcher throws, pitchers can still accumulate wins despite pitching much worse than league average.

So whether you like the simple and easy ERA or the more predictive and true FIP, here you have plenty of evidence that winning a lot of games doesn’t mean you had a good season. Guys on this list were 10 and 20% worse than league average in these seasons and still won the magic 20 games. This is further proof that wins do not reflect a pitcher’s individual performance.

Here’s a quick look at every individual season in MLB history again up against ERA-. There is a trend, but the variation is huge. The adjusted R squared is .3046, meaning wins can only explain 30% of the variation in ERA relative to league average. 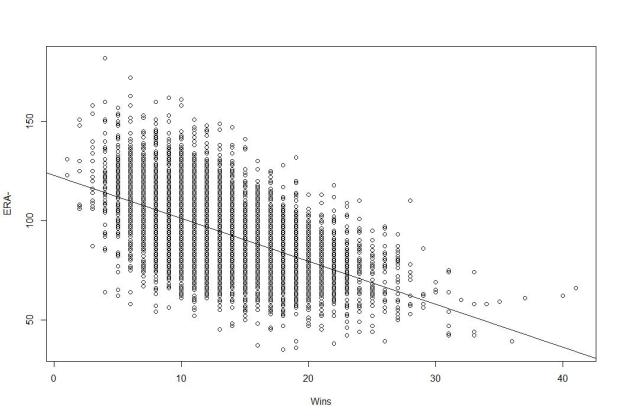 FIP- actually makes wins fare worse, at .1709 adjusted R squared. I won’t bother showing the graph because this one makes the point just fine. You can have an all time great season at run prevention and win 10 games and you can have a well below average season and win 20. Wins are about many factors and pitching is just one of them. You can have a great outing, great season, and great career and never get the wins you deserve and the exact opposite is true as well.

It’s time to outgrow the win and start talking about things that actually measure performance. Even if it’s ERA, which isn’t even the best way to do things. Let’s look at innings and strikeouts and FIP and WAR and everything else. Wins are the oldest statistic there is but they’ve long since lost their usefulness.

If you’re someone who believes heavily in wins, I challenge you to write a cogent response that defends their use. I’d be happy to publish it if you don’t have your own forum and will respond to your arguments. I want to be someone who helps move sabermetrics from a niche tool to the mainstream and I don’t want this to be about drawing lines between people who love baseball. This is my argument against wins, I hope that you take it to heart and really think about it.

Ask questions, look for evidence, and let’s talk about baseball. Share this with people who love wins and hate them. This shouldn’t be a partisan debate between the new and old, it should be about knowledge and fun. Always.